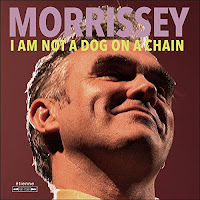 While I will most likely purchase any release from Morrissey, it is not necessarily a pronouncement that all he does is great. Full disclosure, I did not purchase his album of 'covers', last year. I've learned my lesson on that genre, I think.

I loved (and love) the Smiths. Generally, I like Morrissey's music, it's usually good, not great It's usually fair, not awful. Unfortunately, his new disk, I Am Not a Dog on a Chain, falls into the fair column.

To be fair, Morrissey branches out a little here from previous outings. I think there is a mariachi band in here at one point and a piano/harpsichord

There used to be an on-going quiz at a Columbus radio station, that asked, 'What Would Morrissey Do?".  Invariably, no matter the other options, the answer was always C. "Write a song about how lonely and miserable he is." But even he takes it up a notch with his opening and best number on this disk, "Jim Jim Falls" (which is a real place, I Goooooogled it).

......and it has got a REALLY catchy melody. The best of the entire disk. And his vocals are great. I am semi-ashamed to say I love the song.

I do like "Once I Saw the River Clean" - anther great beat and vocal.  "Knockabout World" is good too.  And you have to love "What Kind of People Live in These Houses". It's the 21st century version of "Pleasant Valley Sunday".

I'm less fond of "Love is on its Way Out", "The Secret of Music" and I got bored easily with "the Truth About Ruth".