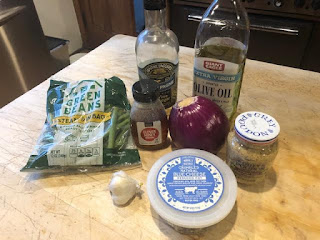 But this is a side. Sometimes it's not always about the main course. Often the side dishes make the meal.

This one is from my cousin, Betsy. I did, but didn't, follow her recipe. Mostly, but not exactly.

One reason, hers has pecans in this. I'm not a fan of the nut, nor of nuts in most food. I've said it before, I'll eat brownies, I'll eat walnuts. I will not eat brownies with walnuts. For some reason, most chinese dishes get a pass with peanuts or cashews.

Still the green bean dish is simple enough......unless you overthink it, like I did. Betsy's dish is to be served cold or room temperature. TOTALLY get that, except it was a cold, damp night and I wanted something warm. So I didn't do a cold version.

Below is Betsy's original recipe. I'll comment where I made deviations.

I made a honey-mustard vinaigrette. Consult your own recipe or on-line to get one you'd like. 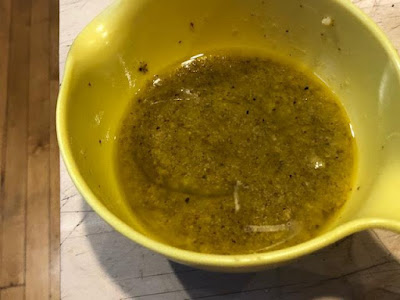 Chop the red onion. As much or as little as you'd like. 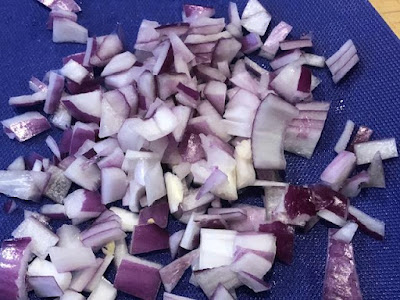 Boil beans for 1-2 minutes in salted water. They are to remain crunchy. 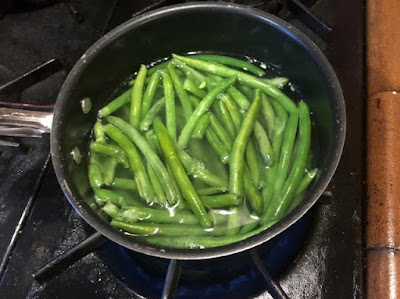 Drain and put them into an ice bath to stop cooking.

*I did not do the ice bath, as I wanted warm beans. I also let them cook for about 90 seconds longer than I should have. They were not crisp. This wasn't a big problem, but I do refer even most cooked veggies on the crisp side.


Put beans into ziplock bag with 1/2 cup of vinaigrette and refrigerate for an hour or two. 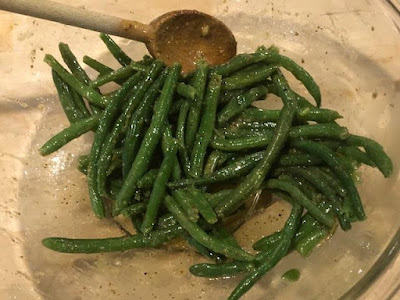 *Again, wanted them warm, so I did not do that part. I did put them into a bowl, added the vinaigrette and tossed. While I do know this, you should add a little at a time. You can always add more, but can't take away. I feel I over-dressed the beans. Nothing horrible, but you know, watch what you do. 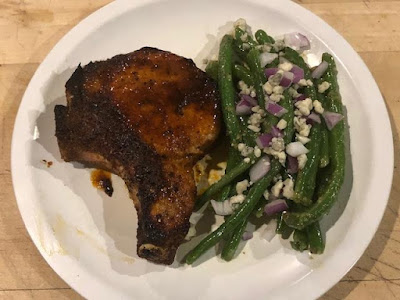 Add the red onion and blue cheese (and pecans, should you go that route).

The combo of the onion and blue cheese is great. Betsy also recommends some chopped hard-boiled egg and / or crispy bacon. That goes down a 'salad' route, which isn't bad. And should you do them cold, as she suggests, it would be a good picnic item.

I liked these and would do them again, including the way they were originally intended.
Posted by Blobby at 12:07 AM