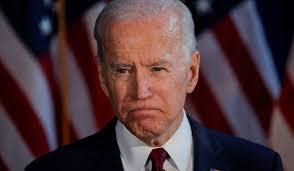 So, the dems are definitely going with an old white man........again.

Save Kennedy, Obama and Clinton (H), they are at least consistent.

And yes Pappy Joe, going by the look in your pic here, I'm as unhappy about this as you seem to be. But what the fuck am I gonna do?

The Dems have proven, once again, there is a one-half nano-degree difference between the and the GOP.  20 some diverse candidates and the DNC rams through and old dude stuck in 4th or 5th place with zero momentum and cash, and suddenly by the second primary and a handful of strong showing candidates drop out clearing the way for Pappy Joe.

Half the states basically get no say. None. The candidate is secure before they even get primaries - covid delays or not. THAT seems fair.

Should he win - and while he needs to, I'm not sure he can actually do it - he will be the oldest person to ever take office by eight years, the closest one in age being BLOTUS.

By all accounts, Reagan, who was almost 10 years younger than Pappy Joe (yes, that's what I'm going to be calling him) is currently at time of inauguration, was sinking well into dementia before the end of his second term. The end of Biden's second term (though no way he'll make that) he'd be eighty-fucking-six years old.

At best, the DNC is setting the dems up to fail in four years. At worst, they're setting the dems to fail in seven months...........until well after I'm dead. We won't recover what has happened in the last three years in my lifetime. Another four will absolutely devastate the nation for good. I see no way around that.

So now, Pappy Joe has to win. Honestly, at this point he has to win to save the Supreme Kangaroo Court.

I said earlier when it was Biden and Sanders that they needed to give their VP names now, so we knew who'd be succeeding these old dudes. That didn't happen.

Granted, they wouldn't be confirmed, but he needs to be able to walk in the door, Day 1, with a fully executable plan and start fixing the country.  It's as complicated and simple as that. Honestly, right now, I truly don't have a clue what he thinks he's going to do. And that does not bode well for convention to election.


I am going on record by saying to all the Bernie deniers, Covid-19 has pushed his would have been presidential agenda to more of a reality. Medical, Education, Banking and Job Protection are all there in way more "socialist" terms than a moderate democrat (or republican) ever dreamed of feared.  The joke is, you're all more on board with that shit because now it's affecting you and those you know.

Bernie's agenda, without Bernie, is now firmly on the table.

uncle joe says he's already started vetting VP and cabinet candidates. I wonder if obama and the clintons are helping out behind the scenes?

and yeah, I ain't too thrilled about uncle joe either, BUT the alternative (the dump) is a crime against humanity.

I'm in the same boat but I'll be voting Biden in November - not that my vote matters much since I live in Massachusetts. This campaign will be interesting to watch unfold against the backdrop of COVID-19 pandemic.

"Half the states basically get no say."

Then have the primary in all states on one day like the general; or two days.

I like Joe, wasn't my choice, but he's getting my vote.

I am a child of the 60s. Bernie is an anachronistic caricature of what we stood for and believed in back-in-the-day. Pete got that right. There was an eloquent tribute to Joe Biden for carrying water for America's first black president. He did that with dignity and loyalty. Joe still references the Obama legacy. I honor Biden for his service, doing his best. We need to lift him up if he is going to be our candidate. So get past the negativity, please!!

Did you ever consider that maybe he was chosen to lose?

Politics is 90% opinion and 10% fact so keep that in mind as you read the rest of my bluster.

It is impossible to predict the outcome in November, but this is Biden's election to lose IMHO. I know several Independents and Republicans who chose to leave the top of the ballot open rather than vote for either candidate who are firmly in Biden's camp. I also think Biden's success with Boomers and older voters put certain states back in play. Lastly I don't see Trump winning PA, MI and WI (states he won only by a combined 80,000 votes) but which account for 46 electoral votes and would give a Democrat a win even if OH & FL continue to trend Red.

My real hope with have Biden at the top of the ticket (despite him not being my personal preference) would be that he can help moderates down ticket in states like AZ, FL, NC etc... His mobilization of the Black vote in SC may also mean that Lindsey Graham could be in the re-election fight of his life (perhaps I'm just dreaming here and projecting my hopes rather than being realistic).