Spo makes his own shirts, or the tropical kind anyway, and one is making the blog rounds for other bloggers to wear, record on via said blogs and then pass along. All in the name of charity.

Spo, or Michael, has the charities of choice being organizations for HIV/AIDS or Prostate Cancer, Doctors without Borders and the Humane Society. I'm a fan of all of those (I mean, I'm not a complete monster!), but of course, I really like the idea of the Humane Society or APL. I'm a big animal lover. And anyways, those doctors can go to Barnes & Noble if they don't have a Borders.

The shirt came to me mid-last week, but I was away on work travel as you may (or may not) have read. So it sat unattended for a few days. ....and I'm not sure I'm Spo Sized. He might have a smaller frame than myself. While it wasn't Jersey Shore tight (I'm guessing, I've never seen!), it was snug in some places and maybe not as long in the trunk as Blobby needs or likes.

While Denton certainly lives and sometimes reads my blog, I can't think of a time he's actually participated in it. I thought it important to show where the shirt has been - and not just at our house. Some kind of landmark in the city I am in seemed appropriate, so I dragged the man around for an afternoon to take a few snaps showing me in the shirt around Cleveland. You just can't do that with a self-timer....not well, anyways.

I don't know if anyone else is planning on doing it at some kind of familiar spot, but I think it a good idea.This is not my project or anything, so I certainly cannot dictate, just suggest.

Without further ado.......I present to you the Spo Shirt of Shirts in Cleveland, OH. (you can always click to enlarge if you choose. I take no responsibility for burned or damaged retinas. I've checked with my lawyers on this.) 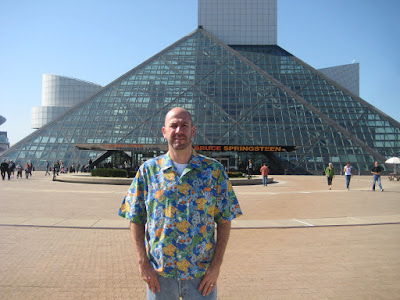 Me & Shirt @ the Rock and Roll Hall o'Fame. Or the JFK Library. Or the Louvre. I.M. Pei is a one-note architect....if you axe me. Since Springsteen probably doesn't have an exhibit at either of the last two places, we'll go with that I'm at the Rock Hall. 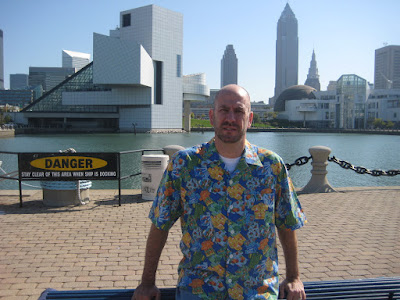 Blobby and the Shirt in Voinovich Park - behind the Rock Hall on the left and the Great Lakes Science Center on your right. The skyline (or part of) is behind me and the buildings. The structure seemingly coming out of my head is the former BP Building. The middle one is the Key Tower (as in Key Bank) and the one right next to it is Terminal Tower. 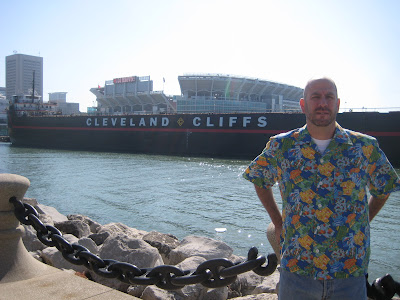 Still in Voinovich Park with the Shirt with the steamship, the William G. Mather. Browns Stadium is behind it. Years ago, the Mather was on the other side of the Rock Hall, and it was there I lay naked (well, me and 2500 people) at sunrise on the cold cement for a Spencer Tunick installation. Since we were naked, there were no shirts - Spo ones, or otherwise. 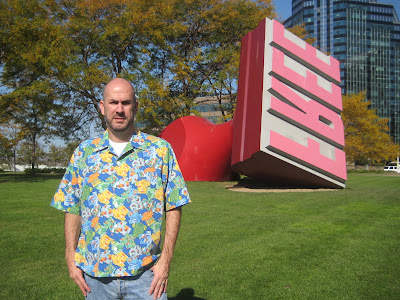 The Shirt & Blobby at the Free Stamp by Claes Oldenburg. I love this sculpture. Not everyone did back in the day when it was installed. Blobby is not everyone! 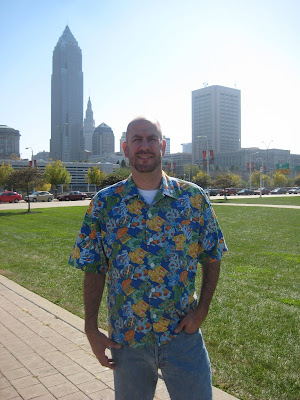 And because the other pictures did not have me "smiling" - and I'd take shit from it at least from one certain blogger (and she knows who she is!) if I didn't at least attempt one, here is a jowly Blobby against the city skyline again. Still the Key and Terminal Towers in the background. Now you can see the f'ugly Justice Center too.

The shirt gets sent out today to John over at I Got Something to Say. It would have been sent out yesterday, but there was no mail delivery. Like me, he'll be out of town when the shirt arrives, but he'll get to it. Maybe he can take picture in front of the Old North Church or with his cutie of a dog, Scooter!


Song by: Mary Chapin Carpenter
Posted by Blobby at 4:46 AM

Just spreadin' the joy. I like you in bright patterns. It almost makes me smile. Can't wait for my turn with The Shirt.

Did you feel the magic? Are you still tingling? It must have affected you -- it made you smile.

When good people do good things, you can't help but smile.

I like that "Danger" sign behind you. I'd ask the Shirt Maker for something in lycra, tight, form fitting.
And as for you, I'd like to see that shirt cropped up a little so I can see your tummy. And lower down that top button for some chest-fuzz action.

"this shirt" - one of my fave MCC songs!

VERY nice pix, blobby. cleveland has not changed too much since my visit in 2000.

and we in philly have an oldenburg - the clothespin, which celebrates the USA bicentennial.

my turn will come...

Thank you for being part of this; I am honored so! I enjoyed seeing you/the shirt in local settings; that is a treat I didn't expect.
And thank you for passing it on.

"And anyways, those doctors can go to Barnes & Noble if they don't have a Borders."
hohoho

I can't wait until the speedo blogger comes a knocking.

Great photos! I've signed up for a turn to wear the shirt... thanks for inspiring me! And for what it's worth - i vote for your "smile" photo. Sweet!