When the day rolls around, I feel the need to be creative in an area where I'm not normally creative. So I don't dress up.

My last somewhat original costume is now seemingly too offensive to put in this blog without upsetting any number of someones. Hell, it was offensive back then. It was back in my fraternity days and while I still think it was kind of funny, it turns out the "girls" didn't like it then and the women of today are probably in their camp.

I think it was fairly safe to say I wasn't out really to impress to many women, even way back then. Maybe their brothers, but not the girls.

So I don't, and won't, dress up. It is just not me. Hell, I've mentioned before, since we moved to this house 5+ years ago, we haven't had one trick or treater. I'm considering not even purchasing candy for a safety fallback. Naturally then we'll get a ton of kids.

Oh oh oh.........(Mr. Kot-ter!), we did stop in this Halloween specialty store, only because it was near the Apple store, and I had nothing better to do. You know these stores, they take over an abandoned space and do up lots of holiday crap like Halloween and xmas......then - poof - they're gone.

So this was the best costume I saw in the store. Ok.......not the best, but the best named. Same diff. 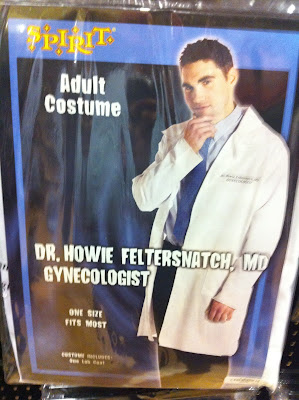 I've been hanging onto this picture for at least a month now - dying to use it, yet knowing I had to wait. Yes, I know I'm 12, but I've made no secret about that. Every time I say the name, I make Denton laugh. Hell, I make me laugh.

Speaking of snatch.......that reminds me of a story I am not quite sure I've ever told here, but on the other hand, it seems like I have. I've told it so many times over the years, it's hard to remember when and where I've relayed it. Eh - I've got a bunch of new readers who aren't gonna bother with the archives, certainly not if I don't. So here it is........

About 20 years ago, my friend Jon and I were having dinner out and the table next to us were a couple who we determined were married, but not to each other. The "woman" asked the guy how his fish was, and he responded, "tastes like snatch". Her response? "Whose?".

Jon dropped his silverware on his plate. I only think 5% was for affect. The rest was out of pure shock - and the man does not shock easily.

We told a few nurses back at the hospital of our story and poor Terri was going down that hall, "what'd he call it - snootch? snitch?......" And Lynne responds, "no, SNATCH!". Mind you this was in a complete tiled hallway, so every word reverberated.

...and that dinner was really scarier than most anything someone on Halloween could conjure up.

Truth be told, I have a feeling that you actually like dressing up....period. But are afraid to tell us.

Howie Felthersnatch?? That is hilarious. I have been laughing at that all day. It would make a great drag king name.

as a woman with a snatch, I am not offended in the least by the costume; I think it's rather funny. my sistahs need to lighten up. and my GYN is a woman - NEVER trust a man to know how a woman feels inside AND out!

BOOOOOOOO to you and denton!