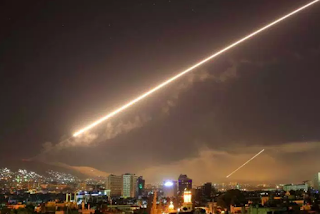 Of course I think Assad is a dangerous, deeply disturbed man. But so is the guy "leading" the U.S.

I'm also cynical enough to think that BLOTUS opted to airstrike Syria Friday night due to a barrage of unflattering press.

WTF is wrong when the pardoning of Scooter Libby is so on the list it barely elicits notice?

No - you got Comey's book snippets being released (which so far are horribly unremarkable). You've got the potential of BLOTUS calling Michael Cohen and potentially exchanging information that should not be discussed. You've got Mueller looking more into Cohen than originally thought.  You got potential payments of $1.6M to some ugly-fuck GOP fund raiser, from Cohen to cover up his impregnating someone he slept with (btw, Stormy's payment was way less - she got ripped off since the guy who fucked her was just as f'ugly). And you got Scott Pruitt caught pretty much in lies about not knowing of raises for his friends and financial ethical issues regarding his travel.

How do you deflect all that in a day?

Mind you, assuming the attack had nothing to do with changing the narrative, I'm also cynical enough to assume it's so it keeps Syrians in their place, so they don't come to ours - - with that travel ban we have of them.  BLOTUS don't want no Syrian refugees here.......because: bad hombres رجل.

But the Libby story should not be ignored. By his own admission, he doesn't know Libby and has never met him. He was a man who interfered and betrayed the secrets of the our intelligence agency to help support a buffoonish president (though now considered a genius by comparison) and a darker than dark VP. Or as some call it - treason.

As some analysts have said: BLOTUS is sending a message to anyone who might be under investigation for interfering with intelligence or justice agencies (far far far too many to name here, and don't want to pick on just one............Jared!).

As you know - - pre-BLOTUS mocked Obama (via text, of course) about starting a war with Syria to increase his approval rating.  Irony!

I cannot imagine any scenario where BLOTUS would do something to get my approval.

"I cannot imagine any scenario where BLOTUS would do something to get my approval." - have a massive heart attack after 2 big macs would do it for me!