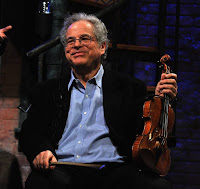 We are totally crushing this movie thing this year. Clearly, I suck at making predictions.  We still have Deadpool 2, Incredibles 2 and Solo to to before mid-year even hits.

Yesterday we went to go see Itzhak.  Though, like Wham!, Mr. Perlman should have an exclamation point.

We felt it was important to counteract another Avengers movie.

This was a movie I wanted to see while we were in DC. It was in the 216 to, but I figured this was an "in the theater for a week and out the door kind of thing".  I guess I was wrong.

They're now on week 5 at our art-ish theater, and while it doesn't play at prime-time, Itzhak is still playing two showings per day.  It might be a surprise to know there were still about 50 folks there. It's probably no surprise that we were the youngest people there.....by 20 years.  We were only like 10 rows up, but it was far  higher than anyone else could climb, though we would have totally perished if there were a fire, unless we pushed seniors, walkers and canes out of the way to make it out.

While barely 90 minutes, I certainly liked the movie though I'm 99% sure it's just due to that I like the subject. Itzhak is smart and clearly talented, but he's a funny guy too. So many Jews who aren't Roy Cohn or Jared Kushner are though.

Not surprisingly, the movies tracks his career from early childhood until present time - even an unfortunate Madison Square Garden appearance with Billy Joel sitting in on the latter's "We Didn't Start the Fire".   Oy, indeed Mr. Perlman.  Other than Joel, the only other celebrity appearance was by Alan Alda who is looking old.

I take it back - there was a clip that included Barack Obama.  OMG I miss that man.

There were times - more early on than anything - where Itzhak had the entire audience laughing. But it was great to hear him play - though I won't say all of the selections were to my liking.

There are some great, but not happy, tales told of violins at the concentration camps - and how people refused to part with them, which is how they ended up there in the first place.

If you miss Itzhak in the theaters, I can't imagine it won't be on PBS next.

I have always wanted to see him play in person. VERY talented gentleman.