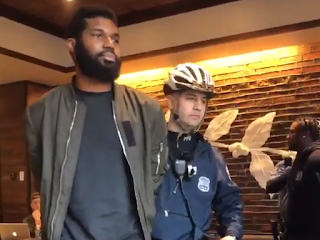 Could there be a more appropriate title for a blog post?  It works on several levels.

Unfortunately, we had to have this Starbucks story unfold at dinner the other night with my mother, who was mortified.....................that people hang out at Starbucks (or Panera) and just use their wifi, or sit and chat and don't purchase a thing.

She was aghast that someone would go in and use the facilities without buying coffee.

Clearly, my mother has never interviewed anyone at Panera before.  Or had a screenplay to write out in public for all to see.

Of course this all went deeper. White folk sit around Starbucks all the time. For hours. No one calls the police on them for trespassing. Yes, I get that the manager asked them to leave and they refused, but the question really is - were they disturbing anyone to even get that request?

So that was one problem. Arresting?  Srsly? At least the Philly prosecutor had sense to not press charges - besides not having a case, why inflame a city?

I had to tell my mom it was most likely a race thing.

Say what you will about Starbucks, I think - after the fact - they did all the right things. Anyone else, if they addressed it at all, would have sent in a lacky......not a CEO.  Sure, he flew to town in his own jet (I'm assuming), but he came and he met with the gentlemen.

I think the closing of all 8000 stores in May to have racial bias training is an important move, even if it is just symbolic. Hopefully it won't be.

Starbucks does a few things that other employers should do:  pay a livable wage; engage their employees in social awareness; provide benefits and yes, even college tuition. You can mock their product all you want - they do the right thing most of the time.....and they make coin doing it, so the Papa Johns and Dunkins of the world can suck on it.

If there is a bigger downside to this - and I haven't been paying attention - is that the official word had been (and maybe it's changed):  "the manager is no longer at that Starbucks".   They never quite said if she quit, was fired or they just moved her to a different location.  I'm good with two or the three.

another stain on my city's soul...these gentlemen were waiting for a third person to conduct a business meeting. lucky someone filmed the entire scene on her cell phone to back up the men's story.

fucking racism. bitch manager is gone. I can only hope she was fired, not transferred. and fuck the PHL PD; our mayor and DA are going after them.

I first heard that the manager was moved to a different location, but now they're saying she no longer works for the company which, I hope, means she's out of a job.

May I offer a different perspective?

Was this "racial profiling?"
Certainly seems to be.

However, should the action of one, single, individual employee warrant nationwide backlash, protests, and boycotts?

In my opinion, this is an overreaction given Starbucks' proven track record with diversity and positions on issues such as gay marriage rights.

If it was corporate policy to phone the police because someone planted oneself at the location without making a purchase, yes, protest.

Starbucks has in excess of eight thousand stores. Just by the law of averages, there are bound to be at least a handful of jerks as employees.