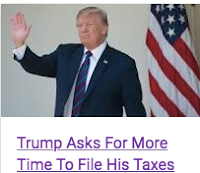 When he says 'more time' he means, never. He's just hoping no one will remember or notice - and if / when they do, he'll flip them the bird - metaphorically, that is.

This scenario is not beyond reason. It has played out time and time again - even with the promise of producing them. The pre-campaign, the campaign, but not so much the post-campaign.

He's not filing. He's not showing them.  Suck on that.

Yes, there was no federal refund this year. Oddly, I'm ok with that, especially in this day and age. Both of us are ok paying our own share. We need infrastructure, schools. libraries, police, fire, the whole works.  We have the money to pay them, so why wouldn't we?

I'll be interested in what next year brings. In theory with the tax cut bill, we will have a smaller one, or possibly a refund. I don't know if any of that is true, but by that time, the mid-terms will have come and gone and the GOP might get re-elected on perpetuating that potential fraud......but by then, it will be far too late.   ....like November 2016, all over again.

Actually, that's not true. BLOTUS showed exactly what kind of president he'd be, and he has been that.....and so much less.