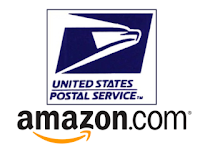 The government dictates postal rates, do they not?  Well, kind of. The Postal Regulatory Commission does. The commission has five commissioners who are appointed by the President and confirmed by the Senate.

BLOTUS signed a tax bill in December 2017 that, and I quote "slashes" taxes on large corporations, and what BLOT says 'probably the biggest factor' in GOP tax plan.

So.....if BLOTUS' vendetta against Jeff Bezos - who owns the Washington Post....., oh and Amazon...isn't actually a vendetta about what the paper writes, then riddle me this:  why is there a problem with the U.S. Postal Service and Amazon?  Why the call for Amazon to pay more taxes - when he first said the company paid no taxes at all.  {Fake News!}

BLOTUS made me LOL - literally - when he called the USPS "Amazon's delivery boy".  Ummm... that is their job, right?  Delivering. It's their only job.

If USPS is losing money - doesn't that fall on the PRC / government?   ...and by all fiscal accounts, package delivery is the one area within the post office that is not losing dough.

None of this seemingly comes up by the Fake News Organizations - which at this point, is pretty much all of them. It's all becoming 'fake' one way or the other.

They've all been such hypocrites or scaredy cats that no real news gets out. Where was the true call-out on the 'no tax' comment?  Where was the real discussion of how the USPS works?  I mean - it gets out there, buried on page 18a, below the fold. Theoretically, of course, because who reads physical papers anymore?

Better yet - the total joke about needing to pay taxes. Really?  From BLOTUS?

I seriously think BLOTUS has even forgotten his whole releasing his taxes bullshit story. Certainly the press has. Even the DNC has. If I were Bezos, I'd say "I'll consider paying more tax if and when you show all your tax returns".

But really - this is the tax plan our "leader" put forth. If he has a problem with any company paying less tax, maybe he shouldn't have signed his own bill.

Of course this is a vendetta against the Post and Bezos. And of course, all media outlets are regurgitating his words, but in such a way that if there is opposition, it's so much later in the story, no one hears that.  ....and this is how BLOTUS wins.

....and for the record, the BLOTUS campaign / White House has spent more than $150k at Amazon.

Thanks for your business!

I've been following this......this utter farce. I'd say that Mr Spanky's got another screw loose, though I doubt if there are any screws left in him - apart from his giving more Stormy-like ones (hush-hush!)

Bullies aren't bullies unless they can bully people around. And because of the Post, President Tippy-Top can shove Amazon around. Perhaps it is growing too large, but what about Wal-Mart, the company that did put Mom and Pop stores out of business. A company so large that they started the trend of demanding products be built to their price point and their standards. Silence on that one because the Walton's don't own the Post.