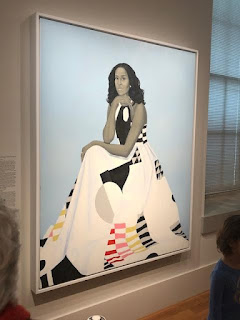 Whilst in DC this last weekend - and a few days before that - there were a few things I wanted to do.

As I've been there often, for work and for fun, most of the touristy things have been done. There isn't really a monument I still need to see, though they're hard to avoid on some level. We did find ourselves near the Jefferson (the cherry blossoms are starting to come out). We walked down to the MLK one (again) and it's hard to avoid the Lincoln when you're down that far - not that we went up into that......this time.

I did get to flip the bird at the White House. That wasn't on my agenda, but hey, why not?

We actually had three things to do, and honestly we only did two of them, but hey, I'm ok with that. I don't like full full agendas on my time off.

One was the Air and Space Museum out near Dulles Airport. It's very very different than the one on the Mall. Space Shuttle Discovery is there (that makes 3 of the 6 shuttle - one being the non-working Enterprise) that were constructed. The Enola Gay is there, as was a Concord.

The other thing we didn't do was the zoo. Yeah, some day I'd like to see a panda, but I didn't want to spend a day trekking around a zoo. 710 was ok with that.

Yes, I've been there before. Yes, they have great art. But I really wanted to see the official Obama portraits. I told 710 we'd be there before the doors opened to beat the crowds. He poo-poo'd me a little saying he didn't think they would be that popular.

I was expecting to be in there by 08:00. I assumed most tourists would be l-a-z-y and not be up by that time, let alone looking at art. 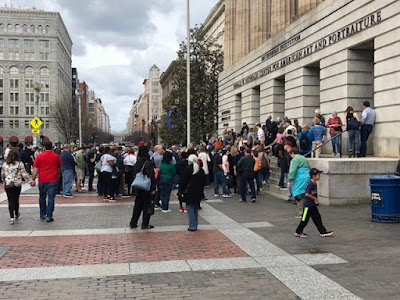 There was a line. This was 15 minutes before doors opened. The crowd just go bigger.  710 assured me folks were there to see other things.  I was doubtful.

While we didn't go right to the 3rd floor to see Michelle's portrait, we looked around at some other great things. But it really wasn't long before we went there. 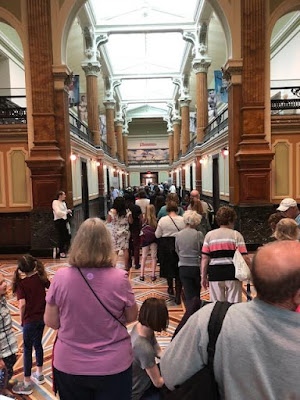 There was a line. A long one. 710 acknowledged he might be wrong.

Since seeing both Barack and Michelle's portrait released, I was in awe of their non-traditional nature, but on the other hands, I was kind of put off by that too.  My first thought was, "good for you for not going with the norm"; my second was "ohhhh....but why did you do that?".  But my third was, "no, this is good. Go against the grain".....and that's where I landed.

I wanted to see them in person for a few reasons:  One, I wanted to really see them in the flesh, so to speak. Secondly, there is a certain kind of support for going that goes against anyone liking this current administration. If going to see a black president got under their skin even a little, it was worth it.

Judging by the crowds, I would say I wasn't the only one.

I'd find it simply amazing if there was this kind crowd waited to see a portrait of BLOTUS or Melanoma. 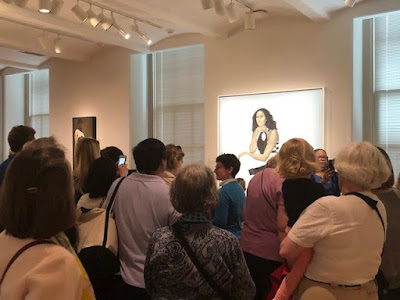 Michelle's portrait was nicely done. I liked it, though it was hard to stand and truly take it in. Sooooo many folks getting selfies in front of it. No one was truly looking at the painting, they were too busy getting a good pic of themselves in front of it. I was annoyed (well, more than my usual demeanor).

Eventually, we ventured down to the 2nd floor to the Presidential gallery. Those are impressive. Some truly the official portraits (Washington, Lincoln, Jefferson), some just artist renderings (de Kooning's Kennedy; Close's Clinton, etc).

As they pretty much go in order, Obama's was deeper in and c-r-o-w-d-e-d. There was a huge line even within that wing to get close to it - you know, for more selfies - but I wasn't waiting an hour for that. I stood on the side. 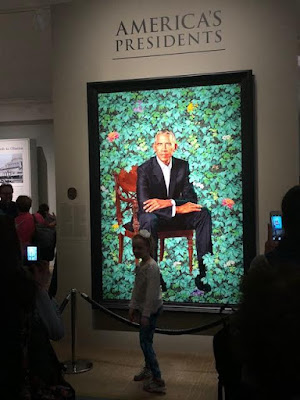 It turns out, I really like this. The semi-casualness of it, the colours. The defying the establishment of the office via a painting, when it turns out Barack has done more for the dignity of that office than so many before him - and so far, after him.

While waiting for 710 to powder his nose, I chatted up a security person near the front. I axed her if attendance has been way up since the arrival of the Obamas.  She was like, "Oh my g-d yes.  WAY up. ...and it gets so much worse the longer the day goes on."

Maybe this is a short-lived blip, maybe not. We love the Portrait Gallery, so we go a lot. But I'm happy for anything that gets anyone into a museum.

Song by: Forest for the Trees
Posted by Blobby at 12:05 AM

I need to stop by one day, I pass under the building going to and from work each day. It looks like it is worth the wait. I am glad to see it is crowded.

Udvar Hazey is worth the trip to Dulles, if you like things that fly. An amazing collection in a great space.