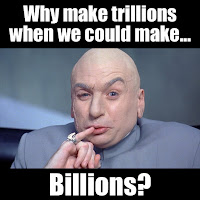 Well, I guess I know one reason BLOTUS is all up in arms about the FBI raiding his lawyers office - I means, besides 1600 Pennsylvania Ave has more witch hunts than Salem - is that while I'm sure he wasn't happy, it was a nice distraction from the soon-to-be breaking news of the CBO projections for the National Debt.

.....and while he can try, BLOTUS cannot blame this on on Barack.

The deficit is poised to go over one trillion dollars (sorry - I had no songs with 'trillion' in the title). That is up 21% since BLOTUS took office. Not elected, but walked through the door.

And says the CBO Budget Director: the federal debt is projected to be on a steadily rising trajectory throughout the decade.  So - yay for us!

Oh - and that new tax law that BLOTUS signed? The tax law will cut government revenue by $1.3 trillion from 2018 to 2028.  Yay again!  During these years, deficits will average 4.9 percent of the total American economy — higher than at any point since World War II other than during the recession in 2008 and 2009.

Where is all this economic growth the GOP congress talked about?  Is it just me that is confused?

No - they're just hoping you don't notice before the mid-terms.


Song by: Nothing But Thieves
Posted by Blobby at 12:06 AM