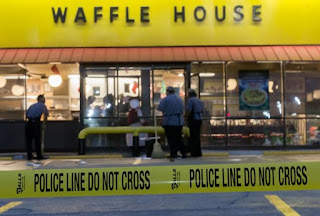 Another mass shooting.  Another time I'm not remotely surprised.

Of course, the location and dress, or lack thereof, is what made the story unique........at least to start.

Nekkid he came.  Nekkid he shot.

I never bother with the shooters name. It's meaningless and they're not going down in the annals of history or anything. They are blips. Giving them names - repeating and publishing them - gives them a feeling of power, or being someone.  They're not.

First off - the only wearing a jacket into Waffle House was a genius move. Do you know how sticky every surface is in there?  Boysenberry syrup all over the counters and floors. That stuff is murder to get out of your clothing.     (too soon?)

Practically though, it's probably harder to trace a scent, should one be using dogs, if you dress later.

While of course the murders are horrible - W.T.F. with the FBI and this dude's dad?

The FBI confiscates this will-be killer's guns a year ago after being arrested near the White House (which now is really just a northern Waffle House.....with the same clientele).......and gives the fucking guns BACK to his father?

What the hell, man?

I don't care if they were owned by the dad or not (and I don't know if they were). But when Secret Service and the FBI see you as a threat here's a little hint:   keep. the. confiscated. weapons.

...and dad just giving them back to the kid?   I'm sorry - but this guy is an accomplice. The criminal court might not see it that way, but I bet the civil one will. Doubtful that guy will have anything to give the defendants, but fuck it, take everything he owns and sell it.

The truly plausible part of this whole tale?  The "delusions" that Taylor Swift was stalking the gunman. It's quite possible. I mean, is there anyone left she hasn't dated?

both the dude & his old man need to be charged with murder.

The saddest part is that we're no longer surprised or horrified by these incidents. As you indicated, the only reason anyone paid attention is because the guy was naked.