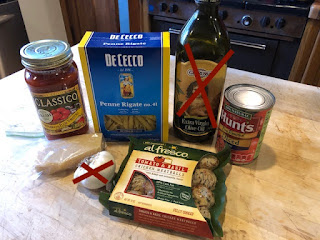 Cooking with Blobby - wow - when's the last time you saw one of these?

Technically, it is kind of Cooking with 710. He's made a variation of this before, but wasn't home, so I took the helm so there'd be dinner on table when he was back from work.

This is a one pot / pan meal. And easy, as long as you don't fuck it up like I did. It was fixable, but I still fucked up.

First off, you see the Xs in the picture?  I didn't need or use some of the ingredients.

Let's run it down:


First off, I substituted sausage for chicken meatballs that had tomato and basil in them.


You start off by browning the sausage (or chicken meatballs). 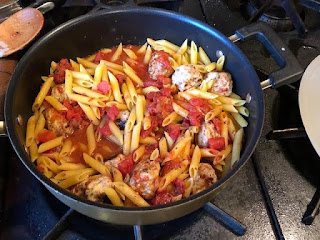 ....and this is where I fucked up.  I wasn't paying attention and dumped in 16 oz of pasta - the entire box.  I didn't catch this until later. 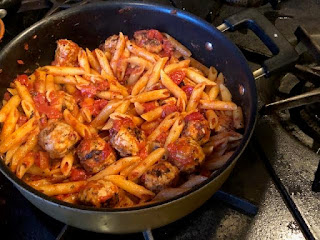 When I uncovered when I realized it wasn't right. Not enough sauce.  Well, there was, it was just double the pasta.  D'oh!

I added more tomato sauce. It all worked out. 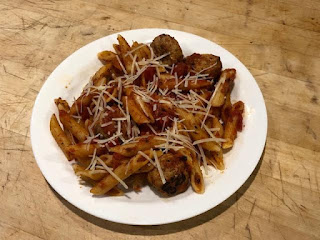 The lighting didn't seem to work here, but it was good.  I really enjoyed the chicken meatballs, much more than I would have sausage.

Rachel Ray would be so proud of you!

If it was edible, you didn't mess up. This looks really good, and I'm always on the look out for simple dishes. Now, what kind of sausage is that and can any other pasta be used?