Fox on the Run 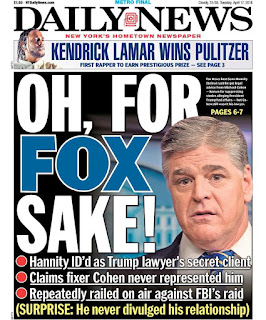 The Daily News kills it with their covers. They put the 1980s NY Post to shame.

Sadly, Hannity's affiliation with Michael Cohen will probably come to nothing, but in the meantime, it is fun to watch him and FOX squirm a bit.

FOX doesn't care that much - as they are run like State News.  If Sean doesn't lose advertisers, he's not going o a weeklong planned vacation.

One can say that a news organization is there to report the news and facts. In reality, they are there to make money. They are a business, plain and simple. Hannity's ratings would have to suffer, advertisers leave for anyone in the front office to sit-up and take note.

Sure, he probably is /was ethically bound to disclose his relationship with Cohen to his employer and to his viewers. But when you think of FOX, 'ethical' isn't in the top 25 adjectives that springs to the top of your grey matter.

Listen, he's a douche supporting a bigger douche (if that's even possible).  So far, BLOTUS has been fairly teflon. Hannity has been down similar paths before - coming out completely unscathed. Cohen looks like a sweating pussy who will crack, given too much more pressure.  If he does and it chinks the armor of BLOTUS, so be it.  If he helps damage Hannity in the process - bonus!

and faux noise is standing behind their man. sham business!