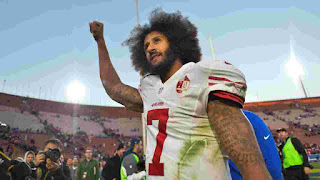 There is an interesting article in the NYT regarding a 'secret' meeting last fall with owners and players from the NFL.

It 'seems' like a good-faith effort from the NFL to invite select players to said meeting, but it sounds (to me) like they wanted to use them to send a message back to the rest of the players.

The owners are / were so worried about BLOTUS and his tweets regarding Kneelgate, with falling ratings and burning jerseys that they needed a secret meeting..............which then they released the details of 5-6 months later.

Clearly, some of the owners are so far up BLOTUS' ass that they call him by his first name only, not by his last and certainly not by his office. To me (again) it seems more about friends helping friends than owners backing their employees.

Some of the players at the meeting discussed the blackballing of Kaepernick with the owners staying silent - as would be expected from rich pussies.  One player stated he should be on some roster - and I can't say I agree with that or not. If his playing abilities are up to par - absolutely.

The article comes of as the owners being dicks. I think they are dicks - but not just because of this instance. It's just sad to see....and read.

....and for whatever you do: do NOT read the comments from readers.

Song by: Sarah McLachlan
Posted by Blobby at 12:06 AM

racism is alive and well and encouraged by the dump and ignorant white rednecks. sad.