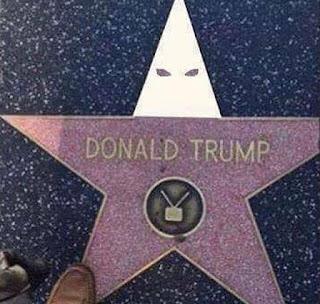 I was going to make this image smaller just so text would wrap around it more cleanly.  But then I thought - 'no'.

I should make it bigger. It should be projected on any and every building that exists.

During the 2016 campaign, it could be argued that Dump was flirting with racism. Testing the waters....if you will.

Oh don't get me wrong, I called him a racist back then, but that was more of a gut feeling. As the shyster that he is, I thought, "welllll......maybe he's just building a base"

And he did.  And if you build it, it WILL come.

SCROTUS IS A RACIST.

And if you voted for him, and / or support him, you are too.


His pardoning of Joe Arpaio is another stitch to his white hood, to go along with the robe he had made for Charlottesville.

This is pardon is problematic for any number of reasons. The most obvious is that Arpaio is a racist - plain and simple - and he was convicted of violating the civil rights of non-whites.  ....and that is for which he was pardoned.

This is on the heals heels of Virginia. Dump can attempt to rewrite history by ignoring and leaving out parts of what he said, but he said it.......in print.

The other problem with the pardon is:  the pardon.

Before, it was just suspect that he might use it proactively.....mostly for his friends, supporters and family. I have no doubt he will indiscriminately use that power to let sooooo many off the hook.


I just saw video of Shrub being interviewed about Katrina years after the fact. Sure I hate / hated him too, but I'll give him this, he admitted he was wrong.

Those are words you'll never hear from Dump.


....still, do not let this distract you from Russia and all the other shit he's doing.

Song by: Janet Jackson
Posted by Blobby at 12:02 AM

this country has so damn many vile pieces of shit living here. anyone have a giant vacuum to dispose of them?