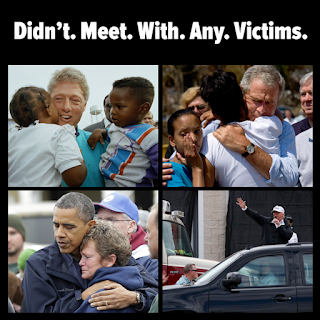 I was hoping Dump would be a bigger disaster at disaster relief.

Don't get me wrong - he wasn't good, but he wasn't horrible.  ....except for the 'I'm in campaign mode', and actually commenting on the turn-out of the crowd.....you know, instead of helping people.

You know, Houston is in serious disaster mode, so it's appropriate to divert the police and emergency services for his motorcade while people die.

Of course, it's hard to look bad when you're competing against Joel Olsteen (is that his name?). Is there a bigger douche this week?

And his damage control helped him not one iota.

I almost wasn't going to rag on Melanoma and her Jimmy Choos. Let's face it, she wasn't going to go near any mud or water. But then she had to fucking wear that hat with FLOTUS embroidered on the front.

J.F.C.  Must they brand everything?

Naturally, being a gay man, and someone bringing up a hurricane and fancy footwear, my mine immediately went to Kathy Griffin.............as it naturally would.

Song by: the Lovemakers
Posted by Blobby at 12:11 AM

Really? The Louse didn't meet/embrace anyone? I suppose if he had there would have been pictures, so I can believe he didn't do so.