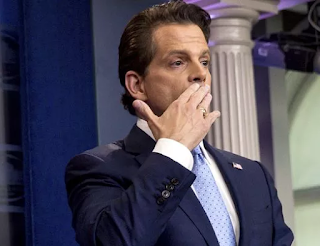 You can't even go on a bloody holiday for a few days and tune out of the news - no matter how hard I try.

Friday, before we left Boston, it was the Priebus firing. Yes, it was weird, but not unexpected. More weird of how it went down. But Reinhold had to see it coming, no?  Still the schizophrenic White House is out of control.

Don't even start me on Scaramucci, though it'd be like ignoring the elephant in the room.

Blobby went for a walk on the beach alone two days ago, only to return to the resort pool where 710 told him me of the news of his abrupt termination.

I was, and wasn't, a little surprised. First off, there cannot be to Dump-like folks in the White House. There was no way two foul-mouthed assholes could remain in power. And that whole thing of a communications director firing people, even insinuating he could fire the chief of staff, seemed someone too big for his britches.

Secondly, was he even part of the team? Allegedly, his "start date" was to be in August as he had to divest himself of his company to avoid conflicts of interest. Pffffffft.   Why?  Dump, Ivanka Dump, Jared Dump haven't bothered to do so.

Do any of you see that really happening?  A general should need and want order. He's not going to get that in this administration. He won't last six months either, but this time, he might be the one doing the walking.


But of course, here is the bigger take away:

Since Priebus' firing....or the appearance of Scaramucci in the first place....how often in the papers, have you seen the words:  "Donald Jr." "Jared." "Collusion". "Probe."

Yeah - me either.  Low single digits, if at all.

And this, my friends, is how they win.  Distraction. Deflection. Sight of Hand.

Speaking of how they win:

"When you see these thugs being thrown into the back of a paddy wagon. You see them thrown in rough. Please don't be too nice."  SCROTUS said to law enforcement in this country.

You can guffaw at the following, because the rest of 'Murica is too, because they don't see it as a possibility:  German police became the Gestapo. Hitler controlled the media.

It could be argued that they are bad guys and if they get banged up. so be it. But it's a chip away at the base of our civilization and our civil rights. The police are already not doing a bang-up job at their public image. This gives them more fodder if the President and the Justice Dept support their actions.

It could be argued he's talking about 'thugs'. But what is a 'thug'? Bet you don't think you're one, but the Gestapo might think differently.  And by then, it's too late.

Song by: Guided by Voices
Posted by Blobby at 12:04 AM

It was very reassuring to hear the official WH spokesperson say that the 'Mooch' could no longer stay because his language had been "inappropriate". Quite right too. Just imagine if ANYone was permitted to remain in post whilst employing indecorous speech! Then where would be?

Watch what they are doing behind the purposeful as well as accidental distractions.