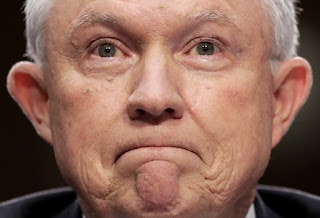 Are you afraid yet?

To paraphrase Master Yoda:  "You Should Be".


Do I care that the Department of Justice is "going after" leakers? Sure, but I suppose it is there right - to a degree - to keep workplace things confidential.   .....except, the DOJ is not the Executive Branch. It's that whole separation of branches thing.

If HR in the WH can't handle their own staff, there are bigger issues. Though allegedly they might be getting lie detector tests.

That has me cracking up. I think they need to start with Mike Huckabee's daughter. She lies daily. LIES.  ....and no doubt considers herself a devout christian.  Oh the irony.  Oh the hypocrisy.  And no doubt she's part of the White House bible study group.  Double irony. Double hypocrisy.

But the DOJ, especially Jeff Sessions, is the scary one in all of this. Perhaps he's trying to keep his job - except that his job is to uphold the law......the Constitution.

Leaking unclassified information might be a fireable offense, but it's not an illegal one.

Yet Sessions is seemingly taking it one step further and basically threatening the press should they print any leaked information.

Think about that for a moment - won't you?

First amendment be damned, he will try to prosecute the press for printing leaked information. I mean, this is a guy who prosecuted a woman who laughed at his confirmation hearing.  Onion skin is thicker than this man's own.

So the building blocks are all in place:


Supporters and non-involved parties can all cast a blind eye to this, but this is scary shit. You are looking at a government controlled press.

North Korea has that.  Syria too (for the most part). Ditto with Venezuela  ......and Hitler controlled Germany's press.

And I get that I have made yet another Hitler reference with this administration.......but that is why it's so scary. One could argue that Adolf H. did it slowly and deliberately over time, almost with no one noticing. SCROTUS & Co. aren't taking their time......and while people are noticing, there is no one doing much of anything to stop them.


I think Sessions is a slime in the first place, but as I said earlier, his job is kind of on the line with his boss. This looks like having both lips pressed firmly against SCROTUS' anus - with tongue probing inside - but the combo of slime-buttlicker is a bad one.

I wish I had the answers on how to counteract all of this.

Lawsuits?  It seems fruitless almost. Lawsuits against the Department of Justice. That is a lot of thwarted hoop-jumping to try to get to the Supreme Court - that would fucking hopefully hope up the First Amendment.  .....but with a few of those justices in place, I'm not even so sure.

Bother.  This country is on the verge of dictatorship.