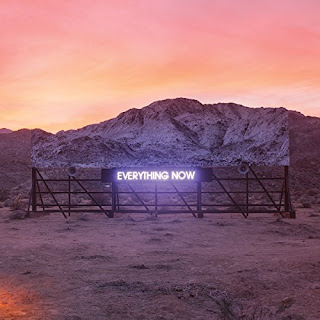 I would like to say I'm surprised at how disappointed I am with Everything Now by Arcade Fire, but I'm not. They eased me into the disappointment.

The band released four songs, one-by-one, before the actual release of the rest of the disk. Some were more disappointing than the others, but none of them were truly good.

The first track released was the title one. I guess if you don't mind them singing the title 1,008 times, you're golden. It was annoying........and yet now in retrospect, after hearing the rest of the disk have I come to realize it might be the best thing on the album.  (not so much for the other two "Everything Now" versions.)

"Creature Comforts" was just bad. I can get over the subject matter and even the tone. I can't forgive the bad lyrics and the worse vocals. Still, it's stellar compared to "Electric Blue".

Does anyone truly think Régine Chassagne, as a lead, is a decent vocalist?  It can't just be me that reaches for the 'skip' button when she appears. You'd think that heavily processed vocals in "Electric Blue" would help her situation - - it does not.  She needs to stick to backing vocals.

The fourth release, "Signs of Life" had promise. Musically, it is the most interesting thing on the entire disk. Lyrically it doesn't work. I like the chorus, but the verses are not good. Win Butler is better than having to talk / rap. I just find it difficult to believe they hit the playback and go, "man, this is really good!".

I figured at this point with a disk that contains 13 songs (but really 10), that if your first four releases are duds, it would be tough to have the rest of the disk be stellar.

Spoiler Alert:  it's not.

Two versions of "Infinite Content" ......and they are two versions too many.  If you thought they said "everything now" too many times, well then you better buckle in.  The versions are 1:37 and 1:42. They may as well been 137 and 142 days long.  This is something the U.S. Military would have blasted over and over to drive Noriega from his home.  If I were Manuel, I'd have given up before the first song was over.

The disk has its moments.  I like "Put Your Money on Me". "We Don't Deserve Love" isn't bad.  "Good G-d Damn" starts off ok. It doesn't end ok, but it showed promise.

Of all the disks I've purchased this year, Arcade Fire is by far the biggest let-down. Everything Now, is by far, their weakest disk.
Posted by Blobby at 12:07 AM

This is getting a lot of airplay at work. These craft brewery hipsters will cut you over this review :)

It's been suggested that you need to listen to this on vinyl. Bruh.

My eye-rolling emoji didn't come through in my last comment. 🙄