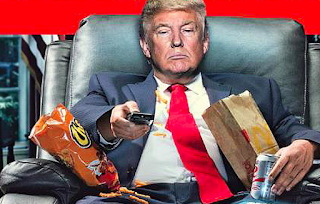 As 710 said a the morning after the election:  "ride out the apocalypse with me?".

We might not have to wait full-term.  Maybe Kim Jong Un is just doing us a favour. Perhaps he actually feels sorry for the mistreatment we as a country are getting under our fucked up leader with bad hair.  I mean, if anyone can relate, it would be he.

So either neither of them know what irony may be, or they don't understand what is classified as classified information.  Either way, I'm a little scared.

Dump and his pals have a new low in approval ratings, though he's denying it. Shocking.  'Declining approval amid widespread mistrust' - so say the headlines.

Oh - and this press shit of Dump having a 'working vacation'.  Are they fucking kidding me?

They make it sound like past presidents never got a daily security briefing or just turned off their BlackBerry.  Hell, even Shrub got updates on Katrina.........sure he did nothing with the 4-1-1, but he got the intel.

Once again, the Fake News media is letting Dump off the hook, like he's the first one to take a call while letting down his hair and pulling up his Depends.  They make him sound almost like a martyr. But that's how it goes.......he's been controlling the media since day 1.


Song by: Dave Matthews Band
Posted by Blobby at 12:06 AM