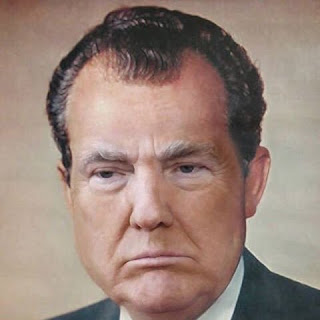 As you might have picked up in this here blog, I am no fan of SCROTUS.  What I don't get is that no one else seems to be either - as his über-low approval numbers are now über-lower. 33% of voters approve of his performance.

And while they called John Gotti the Teflon Don, let's face it Dump should get the name.

I just don't get it - nothing sticks to this man.  NOTHING.

He outwardly lies about the President of Mexico calling him, as well as the head of the Boy Scouts. Both deny it publicly. But once the bell has been rung, there is no taking it back - at least from him and life goes on even though it's a known lie. He lies about things he doesn't have to - he just cannot stop himself.

Ditto with interfering for his son, Qusay Jr.

Say what you want about Dump's interfering with the press on everything that is not his propaganda being 'fake news'. Where IS the news?

It's all commentary. Where are the true investigative reporters?  They have got leads, they have stories, they don't have solid documents, or anything directly linking anything to anyone.  While I don't think it's 'fake news', they make it difficult to disprove Dump's words.

And while I applaud (well, kind of) people making a mockery out of the CNN / White House press briefing on immigration, can we all just agree that it was shitty questions and answers on both sides?

While I'm never going to side with this White House, but even CNN has to know that Emma Lazarus' poem is not the actual immigration policy of the U.S..  The White House doesn't have to make CNN look bad - sometimes they just do it on their own.

And if I have to hear the words "constitutional crisis" again, I'll puke. This is coming from the GOP and DNC - if SCROTUS ends up firing Bob Mueller from his investigation. It all sounds threatening - this 'crisis', but with a House and Senate majority and 2018 elections right ahead, who wants to wager money - any amount - that it anyone will do anything about it, should it happen?

I'm almost rooting that the North Koreans can hit the U.S. with missiles.  They'll do less destruction than we are doing to ourselves.

I had to do a double take on that pic.
JP