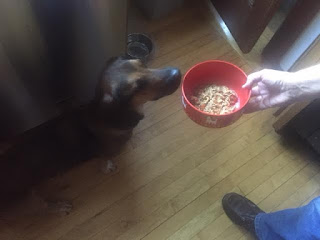 He's now a dog, no longer a puppy.  ....though going by his wilding two nights ago, you'd never know it.

I wanted to do it up for him. Go to Pet People and get a doggie cake for him, and put a candle in it.  Oh, and a new toy.

But folks, that takes planning. Leaving work at 18:15 doesn't really lend it self to running a few miles out of the way.

We will make sure he's treated right though.

Shep religiously gets dinner after his late afternoon / evening walk.  In my book.

So after our walk, Shep goes to his bowl, as one might imagine. But since it's a big day, he got some wet food. He wasn't chomping at the bit for it, but that's when I found he had already gotten dinner.

Petey wouldn't have scarfed it all down if it were his 33rd dinner of the night.

That's him up there getting his 2nd dinner.

Yes, many happy returns, dearest one. Keep your masters, and all of us, happy by just being yourself.