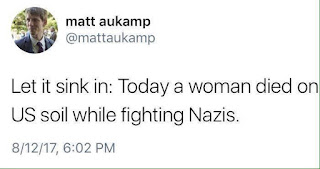 He called them 'repugnant'.  What you didn't see was his hand behind his back with his fingers crossed.

I'll be honest, I thought SCROTUS would stand his ground and not be bullied into saying what people criticized him for not verbalizing. I suppose his new Chief of Staff has some sway with him. That said - he's insincere and I know of no one buying a word of it.........or even a syllable.

I remain deeply disturbed over the weekend events in Charlottesville.

In certain ways, I've expounded on this is what we were becoming, true to thinking it would and could happen. Yet, when it did, I think even I was surprised. Or was it shocked?  Or both?

The protests and the violence were not unexpected. The almost lack of law enforcement was.

There have been far less attended rallies than this in the last 3-4 years. There have been far more peaceful protests where there have been many many more arrests. So one of my takeaways was that there can be armed white men with torches, spewing hate to whom almost nothing happens to legally. But if you're a silent protester of colour, well..............good luck with that.

That actions speak louder than words was deafening. That is what white privilege looks like - in case you were wondering.

But this goes so far beyond race. I was reading a friend's FB feed where he rightfully called out anyone who was a Dump supporter was a white supremacist. He went on to say that if you voted for him for other reasons - immigration, healthcare, economy - you still knew what the possibility for what you were signing on for.  (I even said during the election that you might not be a racist but you have to be ok with knowing you are supporting one.)

I was surprised how many Dump voters Scott knew. One of them saying it was such a small faction of people - less than 100,000 probably, by his estimation - that acted this way and in the big scheme of things amounted to nothing.

....so for my 3,491st Hitler / Nazi /Dump reference in this blog:  O.M.F.G. Asstwats (it's a new word), like this actually think the Nazi party was just 'there' and that it didn't grow from a grassroots effort. Or that the police who allowed it became the Gestapo.

Yes, maybe running down people isn't taking them to the gas chambers, but you know, you gotta start somewhere. If you haven't seen the "alt-right" messaging on the woman who was killed, I beg you NOT to look. It is more horrific than running her down with a car.

It all resonates on so many levels. As much as I'd love to lay this all at Dump's feet, clearly even he isn't enough of a leader to bring this kind of change - albeit, horrific change - in such a short time frame. He'd love to tell you he could do this - but we've seen his talents, and getting people to go along ain't one of 'em.

He did give the power for others to hate. He's made that clear, though he'd be the second to deny it - right after that talking cow, Huckabee-wannabee, would be the first.

My only slight uplifting thing that is coming from this is the facial recognition software and social media identification that people are doing to these asstwats (trademark pending) who attended.  Yes, the protesters had a right to free speech - I'm not taking that away from them. But loving the people who are using free speech to find them, and let their families and employers know what they've raised and hired.  One of those pushing back saying: "I'm not the angry racist you see in the photo".

There is a problem with that sentence of course. Is he not in the photo? Is he not angry? Is he not a racist?  I'm going with the middle one.....except that he's totally angry.

There is a problem not just for the homos when it comes to 33 states being able to fire you without cause. These shits can - and some have - been canned. Here's hoping they go to the central valley of California forced to pick crops, because they can't find other employment and well you know, they wanted immigrants out.

I feel better venting this, but the darkness will return. I'd say I honestly know what to expect next, but I think we all do.

An important message from California: They ain't welcome to pick our crops, thank you.

And tRump is already back to blaming both sides for the violence and even stating that there were "good people" on both sides. So, good Nazis and Klansmen. He's showing his true colors.