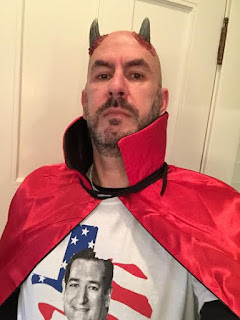 Listen, I'm no fan of Orange is the New Boehner - though it could be argued, that nobody is....even his own wife -  but I gotta give props to the pumpkin head. Calling Ted Cruz “Lucifer in the flesh”, (sorry, I had to bold that) well, how does one not just howl ????

I mean, my ears pricked up.

Well kind of. I was reading the story, not listening to it. So if nothing else, an eyebrow was raised. And I'm all about the eyebrows, dontcha know.

That statement on its own would have been like being in heaven with thousands of puppies who never had to pee or poop. But Johnny boy went one better.....

"I have never worked with a more miserable son of a bitch in my life.”

I mean - that statement really kind of nails it, doesn't it?

The look that is on Ted's face is one of misery.

I could never quite place it:  constipation? holding in a fart? smells something bad?  But no....it's misery. And as the saying goes, it loves company. So fuck if that man isn't going to make anyone and everyone around him miserable too.

I should not let it pass about the 'son of a bitch' part either. Because that is spot-on too.

Don't even get me started on Cruz's VP selection. Oh. my. lord. I could not stop laughing - and on so many levels.

DUDE - you're NOT the nominee. A VP candidate-in-waiting?  Are you fucking serious?

And Carly Fiorina??   - - are you FUCKING SERIOUS?

Let's forget that she lost a state election and couldn't garner much interest in this presidential one either. I find it hard to believe that she stumbled into 4-5 bad jobs with unsalvagable companies. She was the lowest common denominator in all of them. Oh - and all those horrible horrible things she said about Teddy during said failed presidential run.

For the record, I never clicked on anything that said she 'sang' at the announcement of her would-never-be vice presidency. Can you imagine what horror that might sound like?

However, I would like to go on record - when it comes to Cruz / Beelzebub references, I think I beat Mr. Boehner to the punch about six months ago.

And, Teddy thought picking her for a running mate was a good political move . . . can't he remember Palin and what a mistake that was - she still hasn't shut up and gone away. Maybe her was trying to launch Ms F's media career.

I cannot believe I agree with Boehner!

And Cruz has jumped the shark. I believe this morning he'll nominate a replacement judge for SCOTUS and order US troops to attack Flint, Michgan.

a loser selected another loser.