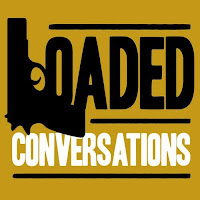 I don't think I am going out on any limbs here to say that the majority of my readership believes in some type of gun control.

I do not think any of you are under the impression that guns will be completely banned, but that some sort of control would be welcome.

I've said it before, and will again, Bertha down at Turn Your Head and Coif needs a license and training to cut your hair.

So why shouldn't someone be required to have education, training and a license when they own a deadly weapon that can dispense 600-900 rounds per minute?

Sure, Bertha's bad 'do will make you want to curl up and dye (see what I did there?), but it's doubtful she can mow down a dozen people in 30 seconds cutting shears. I mean, unless she's a Ninja Hairdresser. If she is, then you're kind of fucked.

But like the GOP - and so many gun owners do belong to that party - you can't talk reasoning to them....or rationally. It's all 2nd Amendment this....and 2nd Amendment that. They'll always quick to throw at you that "you don't know what the framers of the Constitution were thinking when they crafted that".....but neither do they, though they'll claim to.

They are tough conversations to have. It can be frustrating and thankless. Just ask my friend Rebecca.

Becky has started a podcast with Loaded Conversations.

She has two episodes up and running so far - so you should listen.  Now!   (well, after you finish reading my post.)

While Becky has been a friend forever, I'd like to think I'm objective in my thoughts on the production and content quality. While I won't say the episodes are lopsided, as she tries to remain neutral as she goes about crafting each podcast, but there is no doubt - like my readers - she has a proportional response to gun violence.

Her time on All Things Considered was well spent, as the podcasts have a similar feel to them, which is even better as she doesn't have an NPR team behind her.

My involvement in this project is nil. Rebecca bounced a few ideas off me at the beginning. There were plans to participate and have a segment per podcast relaying the absurd news of stupid people doing stupider things with guns - there are no shortage of those insane stories. The first taping was fun to do, but I had reservations that us laughing about that shit might detract from the actual message she is trying to get out there. I'm not opposed to revisiting that concept after she gets going.

I just want responsibility to be part of gun ownership.
That and the complete and utter ban of assault weapons which were only created fro murder.

That said, I liked the podcast, having shared the same kind of experience, moving from Miami to Smalltown Gunville, South Carolina.

Thank you Fearsome and Blobby! It's a labor of love, for sure. And we are going to work in Idiots with Guns, over my cold dead hands!
...eh, you know what I mean.
Proud and honored to be a SOTM. Best notice I could get!