In the never ending quest to do new things and to stay get fit, 710 and I did something we had never done last Saturday.

It was a beautious day, so after I got home from yoga, we got a quick lunch and then headed east - to Holden Arboretum.

It's part of the park department and they've done some great things with grounds - and not just the plants and trees.

Before we got there, we did stop at Penitentiary Glen (which seems like an odd name). It's nearby to Holden. One could say we wanted to see it too. Or one could say I had to stop there....if you know what I mean. But since we were there, we did a few mile hike and went down into what they called a gorge. The stream / river was nice and clean - and it was a hike. The going down was easy enough - the coming back up???....well.....that was a work out.

We did go to Holden for a specific reason and not to see the yet-to-bloom rhododendrons.

Nope. As of late last year they had two new attractions - as much as a botanical garden can have "attractions".

The first is what you see in the title image - a 20 story tower that is above the treetops.....that is, once you climb to the top. 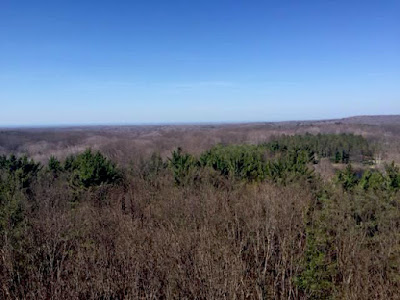 Admittedly, we were probably a few weeks early. I'm sure it would be great when trees are in full bloom, or better yet, in Autumn.

And hooo boy, that tower sways when you're atop of it. I didn't care so much, but I can see how some might.

The other site to see was their canopy walk way. 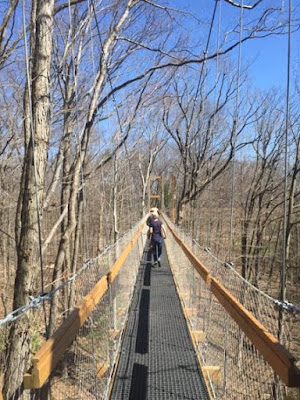 As suspended (and swinging) walk way through the trees.

Again, probably something better once the foliage has appeared. Still it was cool. I imagine once things are all greened in, it takes longer to get up there, as the crowds are no doubt greater.

All tolled, we walked about 9 miles and did the equivalent of like 53 flights of stairs. Going up - as Mr. FitBit doesn't calculate down.

It's safe to say my calves were on fire - even as of last night. Going up stairs isn't a bother, but walking down?  Ouch.

It is no wonder I got drunk Saturday night. All the fresh air and exercise and no food for like eight hours. It was a recipe for easy inebriation.

It was a cool day. Something new. Something fun. I suspect we will be back - but maybe for fall colours.

Song by: Counting Crows
Posted by Blobby at 12:05 AM

Email ThisBlogThis!Share to TwitterShare to FacebookShare to Pinterest
Labels: Nature

I hate the ups, but love the downs. and you can keep the tower and swaying walkway (puke).

You had me in awe right up to the bit where you got drunk!
JP