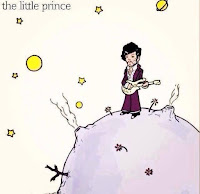 I was in meeting all yesterday morning and missed the news. And you know I rarely turn on radio in the car, so, when someone mentioned it when I got back to my office I was a little stunned.

You know, in a way you could see Michael Jackson's demise coming a mile away. Granted, maybe not from anesthesia, but that was a man who just wasn't well.

I was way way way more surprised by the death of his Purple Badness. And it did bum me out.

The man was prolific - no doubt about that. I won't say too much so, but with a lot of output comes a lot of crap. There's just no way around that. But man, did the man have his moments. I'm not just talking about "the hits" - though he had them. Still, it's rare I need to hear "1999" or "Little Red Corvette" again. I've said it before, I've never been a fan of the song "Purple Rain".

I'm not even sure I believe the story Stevie Nicks likes to tell about that last song. She claims Prince gave her the music and wanted her to write lyrics to it - and she said she was unable to do it. I suppose that's easy to say when you know he won't respond because he's pretty much a recluse to the media.....and now dead.

Sure I liked the singles that weren't huge hits: "Musicology", "the Most Beautiful Girl in the World", "Cream", "I Could Never Take the Place of Your Man", and such.....and who knew he could actually get me to like Sheena Easton with "U Got the Look". He really brought out a side of her I could appreciate. She was a good foil for him.

And of course, he had songs he didn't make famous: "Manic Monday", "Nothing Compares 2 U", "I Feel 4 U", "Sugar Walls". And all the bands who fronted his music who ended up sounding suspiciously just like him: The Family, Sheila E., the Time.

Immediately following his death, our local theater was showing Purple Rain. Horrible movie, when it comes down to it, but the performance segments on a big screen are just incredible.

I've said in other posts, I wasn't a huge fan of his latest works, but that's ok. Prince always did what made him happy - and rarely was it for popularity. Oddly, he didn't really care what I thought of his music.

Song by: Prince & the New Power Generation
Posted by Blobby at 12:04 AM

I was not a prince fan and so I am not caught up in the all the mourning.

I appreciate the man for what he did for other artists. A man who not only mentored but allowed others into the spotlight instead of himself deserves my respect.

You can't deny he had a pretty long career. No matter their age, everyone knows who Prince is.

All the musicians we've actually gotten to live during the same time with. And now 2016 is dragging them through the coals. While I was never a big fan of Prince, I did appreciate a lot of what he did as a song writer.