Cry Me a River

Lord....this just gets better and better sadder and sadder. 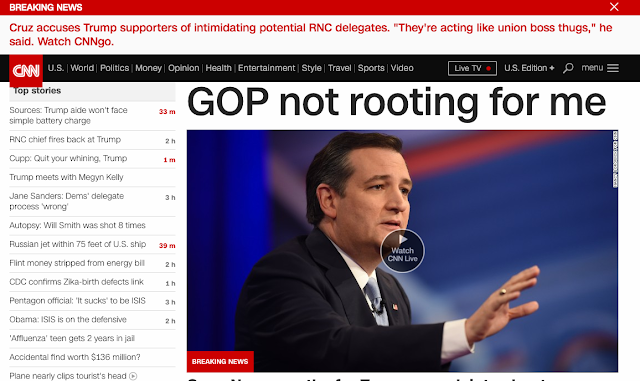 To be fair, CNN's home page makes it look like Cruz is the one complaining. And he is, but not about the GOP rooting thing.

Boo-fucking-hoo.  "They changed the rules on me, so I can't win", he says.

Except for the fact that they changed the rules before he even declared his candidacy......so that's on him.

It's kind of like Donny saying his non-voting kids can't vote because the state had changed the registration rules a year ago...even though the actual deadline was by March 26th.  Of this year!  I'm guessing they've never participated in an election. Or maybe they are too embarrassed to vote for their own father. I would be.

The problem is: the (t)Rumpettes.  They might have listened to the reasoning behind the GOP and his kids' lackadaisical attitude toward the political process......but they didn't hear it.

I gotta say - I do not understand the closing of the ears.....and minds....with any political candidate. I have never been so feverishly blind about anyone in politics.

Of course, Cruz has called the whaaaambulance more than once himself. While (t)Rump might be a bully, Teddy is a fucking wuss. Either way you dice it up - they are both big babies.

And they both are full-on borderline personality disorder folks. Lots of blame for what goes wrong, none of the responsibility.

the GOP is a fucking joke. "feel da bern"

I'm with AM about the GOP Clown Car Sideshow.
It's kinda funny watching that party implode.

I well recall the Johnson/Goldwater election, and am fervently hoping that whichever Republican candidate finally runs the result will be very similar to what happened after that 1964 circus.

which is why we should always strive for wisdom, knowledge and careful consideration of all we do/say.