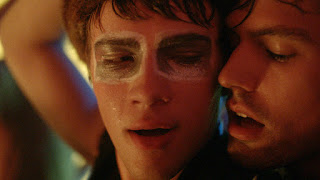 It's been a few years since we took in the Cleveland International Film Festival.

I'm also told that CIFF has a great rep in other film fest world - the viewing. But CIFF also provides filmmakers Academy Award nomination ability - and successfully at that.

Like the last time we went, we viewed one of the "10%" categories.  You know: gay! But at least this time it didn't have that closet case, James Franco or the gay guy from Ugly Betty.

Closet Monster was a smaller-indie from Toronto / Newfoundland (and happened to win Best Canadian Feature at the Toronto Film Festival last September). The viewing was sponsored by our friends David & James who got a block of tickets for a number of us. David used to head the CIFF. His successor (a woman) used to "date" my cousin, Bill.

I knew less than nothing about the film. It had the word 'monster' in the title, so I was prepared for some kind of psychological horror film. Closet Monster turned out to be more of a dramedy. Heavier on the drama than the 'edy'. Drama with a few funny moments.

The movie starts out (well, close to the beginning) with a viewing of an act of sodomy with a piece of rebar. I had to look away, even though it was shot well enough that it was more implied than graphic. Sometimes that can be just as bad.

The story is more of a sort of coming of age while also being gay. Oh, and your parents are fucked up individuals....especially the father, who you could say is homophobic, but that might be too limiting. He could go off over just about anything given the right circumstances....or the wrong ones.

Most of the performances are pretty strong - especially the focus of the film, teenager, Oscar. I wasn't 100% sure about the crush-experience that Oscar has on a co-worker - though there is a very excellent and very nicely shot scene with the two of them. And of course, there are some well placed symbolism in the film - including Oscar's talking pet hamster, who is his friend, conscious and therapist.

Oh, and Isabella Rossellini as a the voice of a talking hamster. I suppose she hasn't had tons of work since her cameo on 30 Rock.

At the post-Q&A with the director, talked about snagging Isabella for the role, as apparently she has an Animal Planet show that she narrates. But the more interesting part of the A from the Q was that going to her house in upstate NY where she had a wall of taxidermy heads given to her by David Lynch.

After the movie, eight of us went to dinner. Sure, we talked about lots of things other than the movie, but of course, we did break it down. Everyone had different takes on it all, but we agreed we all liked the movie. It was a good discussion. And you know eight gay men don't agree on anything.

I don't know what the movie's distribution deal is going to be or if it will be in the theaters ever, at least below the 49th Parallel. There are themes in Closet Monster that has been done before, but this was well done.

I love indie films. We used to have a great indie film fest here until they lost the venue. Suddenly after 10 years the venue said they couldn't do it anymore, despite being paid quite handsomely I understand for the privilege. Glad you enjoyed it.