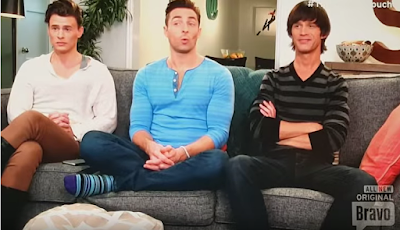 It was a lonely Friday night with nothing to do - so the TV was on and there was a lot of flipping around.

As Jerry Seinfeld once said, 'men don't care what's on television - only what else is on'.

We crossed over into Bravo TV territory - and nothing good can usually come of that.

Yet we stumbled upon the People's Couch.

It is basically the now-defunct the Soup meets Mystery Science Theater 3000.  It works.

Well, it works as frivolous tv.....and sometimes that is ok.

Here's the premise:  a number of different groups sit on a sofa and watch tv - critiquing it, questioning it, making fun of it. It's mostly the latter. And that works just fine for me.

There is the black family - mom, son and dad (who, if you're not looking at him, his voice could pass as a woman's). There is a family of three grown daughters and their father. There are three elderly women. Then there's two black women. Two sisters. A young married couple. And of course, the three gay guys (as seen above).  Oh, and the hilarious butch lesbian (IKR?) and her probably straight female friend.

All of these are on different couches and they just cut between the groups who are all watching the same shows - which can include dramas (mostly), reality shows.....and I think that's all we've seen. I'd say it's a funny show, but we have an N of one right now.

Most of the groups will make you laugh - in different ways. But I'm liking the gay guys, the old ladies and the lesbian & friend best.

I did a little look-see and it seems this show has been on for a few years - who knew?  I suppose that's what I get for never turning on Bravo. And if YouTube is correct, the casts they have now are not the casts they've had in the first few seasons.

This isn't necessarily must-see TV, but it beats having to sit through Game of Thrones. It's nice to see the series and reality shows taken down a notch or two. I suppose that is why I liked the Soup. But now that there's not Joel McHale, the People's Couch will have to do.

There doesn't seem to be a great clip (at least from this season) and the subject matter is cringe-worthy. But find it on your cable channel and DVR it.

Song by: Alanis Morissette
Posted by Blobby at 12:04 AM

Carlos and I are hooked on "The Couch," mostly because it's us. Carlos once said, "We should be on that show."

And I said, "Look at the three old ladies and the three gay guys ... that's us!"

I like all the "People" except for the young opposite-sex couple; they annoy me. Like you I am Team GayOldLadyLesbianStraightFriend.

I'm old enough to remember the time when British TV had only two channels. The next day school playground conversation was very democratic in that everyone could chip in with opinions on shared viewing experiences.

And I may have just spent 20 minutes watching several episodes... damn YouTube.