I'd be lying if I said "I never expected a rebound effect from the Obergefell ruling".

I would be lying if I said I thought it would come so swiftly and so harsh.

But it has, and they have - and in all the places you'd expect - one of the Carolinas (in truth, I would have thought South Carolina to pick it up before the Northern side) and Mississippi. Neither of them are shockers.

In theory, I'd like to think North Carolina is more progressive - they have Charlotte, the research triangle and Ashville. But I suppose that's not enough to keep the deep-seeded hill folk from showing their fear and hate. Of course, I mean the state reps.

I have friends in NC. Some of them gay, some not. Some are religious but not that narrow. At least that is what I'd like to believe of them. I would hate to see their livelihood suffer because of a bunch of asshats. But on the other hand, the state as a whole should suffer. They didn't discriminate on who'd they'd discriminate against, so if they as a whole make a few suffer, a few should make all the state population suffer.

To be honest, I don't even think the state legislature or the governor realize what they crafted and signed into law, respectively.

Under their transgender bathroom law, Caitlyn Jenner is required to use the men’s room, among guys not used to seeing dresses and pumps in the stalls. Likewise, a transgender man with broad shoulders and a beard will be relieving himself alongside women who may not realize he was born with a vagina. 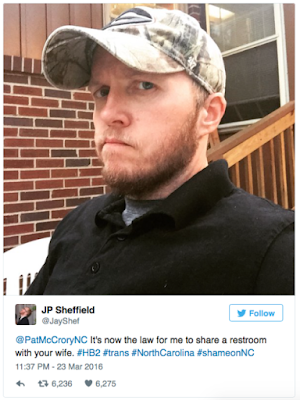 Aerosmith never sang a song called "Lady Looks Like a Dude".  It is much harder to make a rhyme with that.

Maybe Ally McBeal had it right a decade and a half ago. Everyone in the office used the same restroom - often at the same time.

Back to the state's punishment:  Normally I might say 'big deal' to 400 PayPal jobs. But it is a big deal. Besides the taxable revenue, they'll lose the income those folks would have spent on housing, transportation, food and entertainment.

But not ALL entertainment. Because the guy, Stephen Schwartz, who holds the rights to Wicked!, Pippin and others, has just nixed the idea of any of his productions to be licensed or shown in the state.

And somewhere, those big bouffanted southern women who've only seen Wicked!  79 times are having a conniption that it won't be 80, without going out of state. They never think about the nancy-boy choreographers and costume designers behind the production. Or the dykes who construct the sets. Without - they wouldn't have that play to go to. Don't even get me started on the touring production of Victor / Victoria.  My heavens, they'd need the smelling salts!

Ruckiry (not Jon's boss), PayPal isn't the only one potentially not doing business. I say, give it to 'em where it hurts - the pocket book.

Mississippi probably isn't going to feel that financial repercussion. What industry could even possibly leave the state - chitlin production?

It's all very sad. It really comes down to fear and education - or lack of the latter. But you can't teach folks who don't want to be taught.

As for us?  Well our summer vacay was coming down to Maine or the Outer Banks. It's been years since we've been to OBX, but this won't be the year. When the place we stay emailed us about our plans, we told them we would not be coming and why.

One would like to think that you'd get a response back saying, "that's a shame and we don't believe in the law either.....", but such a reply never came.

I think we made the right decision.

shitbag GOP h8ers! you can't reason with them cause they have no brains to reason with. I wish cleveburg could put out the UNWELCOME mat for these douchebags!

North Carolina has the liberal spots that you mentioned, but the rest of the state is very very red.

South Carolina, on the other hand, is almost all red, save our neck of the woods ... and a couple of other spots like Charleston ... which is small but open-minded with a sizable LGBT community, and we passed marriage equality here before SCOTUS told us we had to.

But I'm with you about NC; we've canceled plans for going up there for weekend trips and for the occasional shopping excursion.

Having just returned from the state and a town just north of the NC border I can vouch that red is very red in that part of the world. Ugly white straight people rule and they do not want anyone to have any rights or any say other than themselves. The feel they are entitled to their beliefs over all others. The confederate flags now fly on tall poles along the freeway on private farms as you drive through the state and the don't tread on me license plates have become very common. I wouldn't go there except I do have an 84 year old mother who's newly widowed to look in on. If it wasn't for Virginias governor vetoing it, Virginia would have just approved one of those laws as well. The backlash is more than Obergefell, it's (supposedly) religious (false Christian) and definately racial (Obama) as well. The Ugly isn't just on the outside, it runs deep.
What can I do? I can only enlighten those I know living in those areas that through going to vote they can start to change the hate one representative at a time. That their vote counts just as much as the others that happen to be oppressing at the moment.

It really wasn't all that long ago that we all felt happy that marriage equality would finally come to all 50 states. At least I thought we'd finally turned the corner, and now this. Shocking, really.

I've often wondered why we don't have more unisex bathrooms here in the States. I mean, I know why, damn Puritans. But still, one would think bathroom lines would go a lot quicker if everyone was queued up for the next available. Then again, we don't do that at a lot register lines at retail stores either. *sigh* Sometimes I just don't understand America.