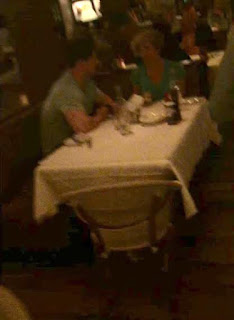 So yesterday was 710's birthday. Save for work, it was a grand time, though nothing super special was done - per his request.

A few years back, I've spent more birthdays with him than I have not. That means, per his lifetime, the majority of them he's celebrated (or not, as the case may be) with me than without. Not a bad maker.

Apres work, we went out to dinner. A nice place, but not a new one. It is what 710 wanted, and that's my job. He wouldn't let me get him anything, so just a nice dinner was on deck. That's ok with me.

Dinner was great. But the best part was the two people you can't see clearly in the picture. They intrigued me to no end. Both had the exact same hair 'do.  ...and not a flattering one.

Whomever their SuperCuts "guy" was, they styled them just the same: ala Flock of Seagulls minus the mousse.

Poor 710. I could barely keep his gaze and I made him turn around - several times - to look.

And then the woman next to us. I just wanted to lean over and say, "have you ever consider having your adenoids taken out?".  Instead I just killed the bottle of wine we had ordered.

Oh yes, It was a Tuesday and it was the third day in a row of drunk. I'd say Rebecca and Morty weren't even there, but 710 was emailing Becky while I Sammy Jo'd* it.

While the line was amusing, his delivery made me laugh, not just on the way out of the store, but in the car and on the entire drive home.

...and it wasn't just the wine making me do the laughing.

*to toss back the rest of your drink, they way Heather Locklear's Poor White Trash character on Dynasty (Sammy Jo) would consume alcohol.

happy birthday, 710! you are a good husband, blobby; most times that's all I want for my birthday too.

So how did you answer to the cashier's question???

And one of these days we're going to have to have a gambrinous session together!