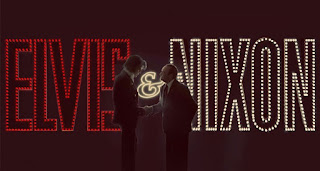 That is what the Cleveland Plain Dealer gave as a rating for Elvis & Nixon.

I'd never seen an A+ rated movie before.

As it turns out, I still haven't.

When I saw the on-line preview two months ago, or so, I may have internally gone "ugh!".  It looked lame. When I saw the preview in the theater, I didn't "ugh" again, but I didn't say "oh, we HAVE to go", either.

But the movie selection currently is a little thin, so, after I saw the rating (though I didn't read the review), I thought "hmmmm....why not?".

As it turns out "why not" is not the best rationale to be plunking down $9 per ticket.

First off, the portrayals are not meant to be spot-on, so if you're critiquing it on that merit, you have to think more broadly, as that is what the performances are. Ditto with the story.

And oddly, Kevin Spacey - the performance I had the biggest concerns about - was possibly the best one in the movie. And if you remember from other things I've mentioned, Spacey creeps me out. Completely. Maybe House of Cards is good, maybe it isn't, but I ain't wasting hours watching the man.

Some of the tale did indeed happen - Elvis going to the White House in search of Federal badge. The movie portrays it like he wanted to go undercover. Priscilla would write that that he wanted to use said badge to have credentials to carry weapons outside the United States.

Even so, the filmmaker stretches out a premise a little too long and with too little pay-off. But there are moments when it is really really good. And I kept thinking, if they had more scenes where Michael Shannon, as Elvis, practices his intro to the president. Something about where that scene goes really resonated with me. I'd have enjoyed more of that.

There were a few instances that were forced -1971 - references to Iraq and Syria. And a few pre-Watergate Watergate references. And it wasn't lost on me that Nixon's representatives and Elvis' representatives meet in an abandoned parking garage.

Elvis & Nixon was mildly entertaining, but apparently either the reviewer doesn't know what an A+ movie actually is...............or perhaps I don't.

That's one for an iTunes rental for me. I'd be renting to watch Kevin Spacey. I like him even though I can see where you might find him creepy. He has that way and I like his brand of creepiness for some reason. His creepiness is no match for the actual creepiness of the character he is playing in this flick.