While we knew we'd be attending their reception two weeks ago, we knew there was one hurdle to get over  - seeing Skeeter and Logan.

I will go on record, as much as we love Georty and they have opposable thumbs that opened the door for us, and it was their wedding weekend, it was the beagles we went to first. I won't state that we came close to tears, but I won't deny it either.

No worries, Morty got kisses from us shortly thereafter. George a little after that - but only because he wasn't downstairs when we arrived. 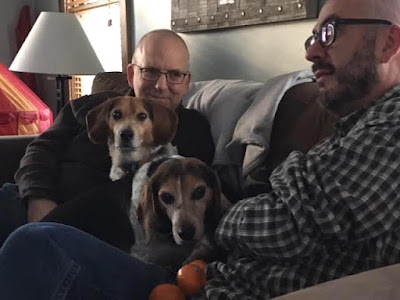 I was happy both boys came to sit with us. It was much needed therapy for the two of us. 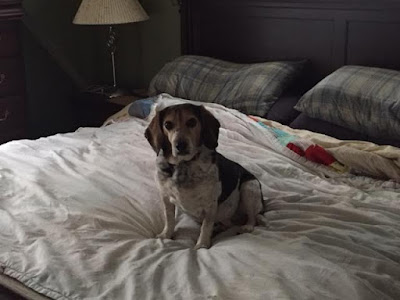 I went up to put stuff in "our" room and passed by Georty's room. I don't know how Logan beat me upstairs, but he did. Sitting perfectly in the middle just watching.  He got some rubs and kisses. 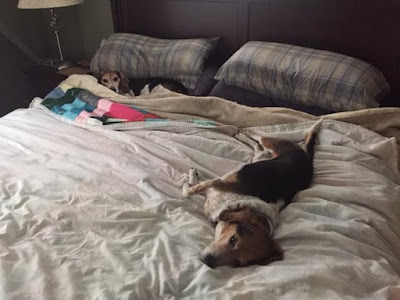 Skeeter joined him shortly thereafter.
He too got rubs and kisses. It's what I do. 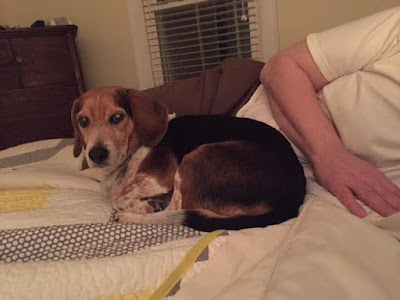 Morty told us that the dogs, while like sleeping with people, prefer "their" bed best. So imagine our surprise - and delight - when Skeeter jumped up and snuggled with 710. And slept with us (well, 710) at least for a while.

No offense to Mort and George, but this might have made 710's weekend. 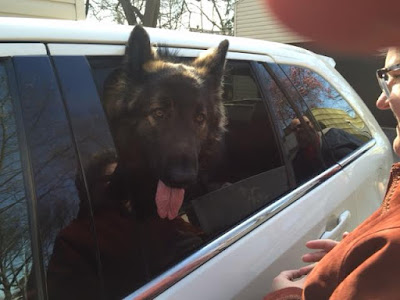 And this big, gentle beast is Rollo. Meredity and Norman's Shilo Shepard. He's a big goof, who was good enough to let me chase him around the yard and give him treats. Sure, he slobbered all over my suede coat, but it was totally worth it. I got a kiss or two too.

It was comical to see him try to get into the back of this car. The poor guy can't quite make it - and Norman had to help lift his rear end into the vehicle. 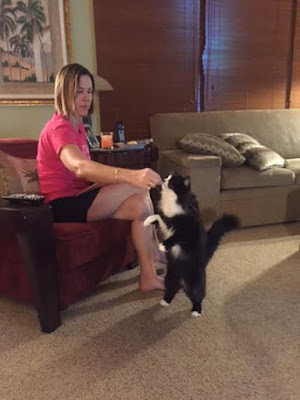 And then there is ever entertaining Pippa and my sister. It's her daughter's cat, but if she had the opportunity, my sister would keep her.  The cat that is, not my niece.

it must have been difficult seeing georty's 2 beagles. they have the face of someone else we all loved.

pippa is also a sweet kitty. sophie is the queen of cute, however.

Great pics. Can I just say, loving the guest headboard. I know... but I AM a designer.
JP

I think Skeeter knew y'all needed some puppy love.

pet therapy is the best therapy