I've said it before and should this blog be around four years from now, I'll say it again:  who gives a flying fuck about Iowa?

For either party, this caucus gets the nominee wrong 50% of the time. Not the actual elected candidate - the fucking nominee. So much time and effort wasted here.

BTW.....ditto for New Hampshire. Their selection success rate is almost equal that of Iowa.

I mean, good for Iowa (and New Hampshire). All those booked hotel rooms, food per diems etc from staffers upon staffers who are just there to check a state they've never visited off their list. It's nice their state revenue goes up slightly every four years......but at what cost?

My lord, the human sludge that passes through town after town - each more reprehensible than the last.

I mean, it's a lose-lose scenario. You want to see (t)Rump get knocked down a peg.....but because of that human bile has to win.....and yes, I'm referring to Ted Cruz. It takes the phrase "the lesser of two evils" to new heights.

They're both negatives, so who could possibly be "lesser"?

Well - there are lessers....but Huckabee dropped out yesterday. The question is: why hasn't Fiorina or Santorum? Or Carson (who is allegedly running just to sell books and build some kind of fucked up 'brand')? 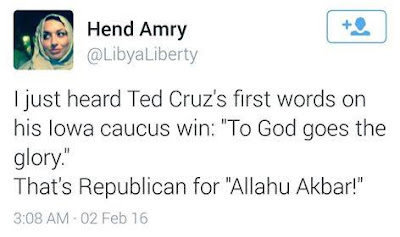 And of course, I could not resist throwing up on FB that Cruz is BFFs with Satan and Pinocchio. 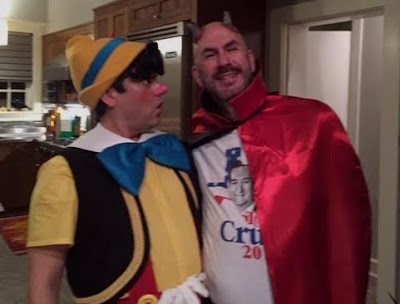 It's a fucking shit-show. The entire thing.

I was never one for seeing her as invincible - nor do I think she should be. I'm tired of people playing the "anointed one" game.  I like Bernie. I hope he pushes her to the left a little. I hope people see he's not taking major donors and she is - she's not as revolutionary as people think.

Song by: Joni Mitchell
Posted by Blobby at 12:06 AM

I'm with you on Bernie pushing Hillary a little to the left.

But I keep going back to that Tweet ... priceless.

From time to time someone in the media will point out that the numbers in Iowa mean about as much as the groundhog's prognostication for the length of winter. The other similarity is that in both cases, a great deal of unrealistic public attention is being given to clueless rodents.

Thankfully in the UK an election campaign lasts 25 days. Even that feels like 25 years. You have my sympathies.
JP

I am still amazed that the election process is so archaic and hasn't been revamped. But America...