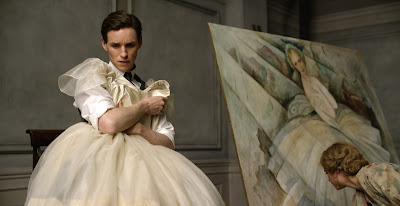 I've been trying to get to see the Danish Girl for weeks.

It's been tough - as there have been so many good movies out there lately, it's been difficult to find time. And it did not help when it was in limited theaters and at limited times.

As has been the norm the last month or two, we are catching many of these movies on what is most likely their last week of showing in an actual theater.

It also did not help that the Danish Girl was lower on 710's list. And by the time did was on deck, it had moved out of our Drexel-like art house theater to what I would call the ghetto mega-plex. For sure I thought we'd be the only ones in the theater on a Sunday, January later afternoon. But then - there is no football until next week....so what are straight older couples going to do?

Let's start out - well four paragraphs in - that 710 was really happy we ended up seeing the movie. I was too. But to be fair, it was good, not great.

Tom Hooper provided decent direction, it was shot extremely well, excellent locations and finely acted. Eddie Redmayne and Alicia Vikander were strong leads - and dare I say stronger when they are together than when apart.

And if going by the only title reference in the film, it seems that the Danish girl would (or could) be Vikander's character, not Redmayne's.

I found Redmayne much more intriguing as a man at the beginning of the film than as a man posing as a woman during. He was good as both, but had much more nuance at the start. And it was a little unnerving how much "Lili" looked like Molly Ringwald.

Vikander was strong all the way through, though very different than her turn in Ex Machina.

There was a familiarity about Vikander too - and I finally saw she had a Helen Bonham Carter-esque quality that was shown in Hooper's own, the King's Speech.  I'm not saying this was a bad thing, but there seems to be a style in his work.

The film had some predictable plot points, but that didn't make it much less satisfying. Visually, the filmmakers did a really nice job. Actually reading about Lili and Gerda, the story they didn't get to - mostly Gerda's - might have been more interesting than what actually showed up on the screen.

There was also a Jack Russell in the movie which got some nice close-ups. 710 kept jabbing me with appreciation of doggies.

And some guy named Matthias Schoenaerts had a role. Normally, blondes aren't my type, but give a guy a good suit (or tux) and a ton of pomade and I'm on board. 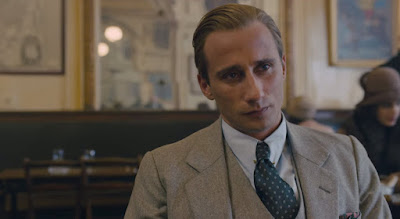 This image doesn't do him justice. Later, 710 was checking his IMDB credits. Apparently they haven't gotten to the entry where he stars in my dreams.

(Actually, looking at his Gooooogle images, he might look great only in this movie.)

And Ben Whishaw, Q, from the newer Bond films, is in it. He's good for his limited role. And he stars in a TV series, London Spy, which so far has been great.

I can see how both leads got their Oscar nominations. I can also see why the movie, even though it's good, didn't get a best picture or best director nod.

I'm glad we saw it on the big screen. Now it's time to go see Chris Pine on the big seas. Well...maybe. Advertised in theaters months ago, it's barely a blip with TV ads and such. I fear being released in January, it's one of those movies that looks good in clips, but in truth is a bomb.

Did you see last year's Far From the Madding Crowd? Man o man, Matthias Schoenaerts is so hot he's combustible! Now I must see the Danish Girl! Those eyes! He exudes virility! Oh, my God! I'm embarrassing myself!

I agree about Vikander, but how I do wish that she'd put a bit more effort into her speaking - (mumble, mumble) - exactly the same fault I found with her in 'Ex Machina', which was my sole complaint about that otherwise outstanding film.

I came across Matthias Schoenaerts ... and that sounds dirty ... earlier this year and, also not a fan of blonds so much, was a bit smitten.

There is a small art-house theater about 40 miles from Smallville where The Danish Girl is playing. We may make the drive.