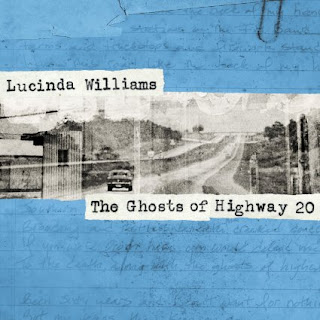 I think I'm giving up.

Not on Record of the Month (not yet at least), but possibly on Lucinda Williams.

With her first, I dunno, six albums, she pretty much hit it out of the park. With her next 2-3, she was ok and the disks grew on me. But with 2008's Little Honey it kind of all went south for me. She somewhat - kind of - redeemed herself with her 2014 release, but a Williams album, to me, should be more than just halfway passable.

I have zero qualms with the musicianship on the Ghosts of Highway 20.  The musicians are great. For g-d's sake, she has Bill Frisell and Greg Leisz on guitars. Not too shabby.

The songwriting seems ok. Not Williams-stellar, but certainly not bad either.

But like the last few disks, it's Lucinda's voice, or lack thereof, that drags the songs down. The gravel, or singing with a mouthful of broken marbles makes Marianne Faithful (circa 1979) sound like sweetest voiced angel ever.

And it's not that Williams should have the perfect voice - that's not her style, it never was - but if you compare, not even her early work, but the could have been / should have been great West and the iffy Blessed in comparison she could give diction lessons then.

Perhaps she has a vocal cord issue. If so, she should get a vocal coach and do some exercises. If she's purposefully trying to sound like this, then the end-result is lost on me.

I get her "true fans" would rip me apart for a review like this. But I own every disk she's ever released. Just because you like an artist doesn't mean they get a free pass for putting out sub par albums.

The bigger question is if I will just buy her next disk blindly.
Posted by Blobby at 12:12 AM