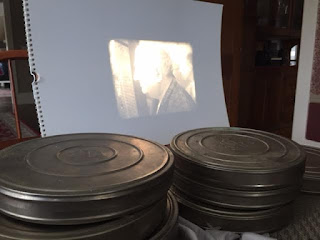 After my father died a year and a half ago, my mother was clearing out some things from the basement.

"Found" is in quotes, because it was always there. We knew it was there, but "we", as a family, were not film people. It was just inherited movies from my grandparents.

They've been sitting in the office for a year now, with no plans to do a thing with them.

Well, that's not true. My father's side of the family once used to be fairly prominent in Cleveland, and the Western Reserve Historical Society has a tons of memorabilia in their storage dedicated to them. My thought was: maybe they'd want this stuff.

710 was way way way more interested in this stuff than I was. I couldn't even interest my cousin to take them off my hands. And rightfully so, as he has enough "clutter" from his own grandparents. Why take on mine?

Of course it was complicated that there was no way to view this material, because who in this day and age has a projector to play such things?

710 was really intrigued what was on those reels.

Honestly, he's watched more than I have, but then I was never in AV so working one of those projectors is beyond me, and the films is so old and fragile, I have no desire to destroy them.

There is no sequence to the canisters. 1920s. 1940s. etc.  And some of the footage is really good. And sometime in the 40s my grandfather was shooting on colour, which had to be a newer thing. The colours are still quite crisp.

But on the film is my dad and my great-grandfather. Whatever Emil thought of my grandfather, my dad was his first grandchild. So it was nice to see them walking together when my dad must have been about five.

After the war, my dad is seen skating on the lake in front of his parent's house with his sister, one of his brothers and their dog, who was chasing them, and sliding on the ice. Fun to see.

I tried to take pictures of some of the things, but it is tough to do. There is no 'pause' per se, at least not where the film doesn't burn. 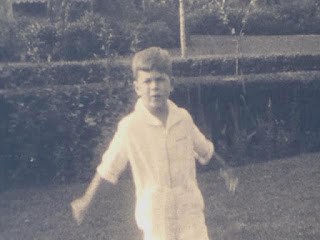 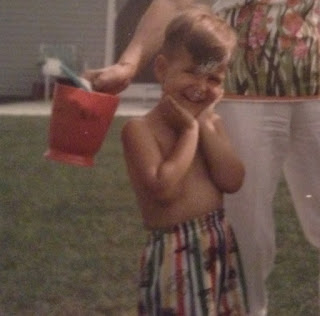 I sent the top one to one of my sisters and then later commented on it - and she had no idea it wasn't me. She just assumed.

710 wants to show the films to my mother, but is apprehensive that they might make her sad. I don't think they will so much. All of them were shot before they even met.

For now, we will keep them.

If we digitize them, I'll make copies for my sisters, but maybe the original film will to go the historical society.


Song by: Shakespear's Sister
Posted by Blobby at 12:06 AM

My father has a box of 8mm from the early 60's, lots of interesting memories in there.

What a great find.
And do digitize them and pass them around. those are treasures!

I always wondered about all the Beta and VHS recordings my parental units took when we were kids. Who the hell would ever want to sit and watch all that. Maybe it does need to skip a generation or two before it's of interest.

You do look an awful lot like your dad as a kid!

I definitely think you should digitize them. You've already gotten some 'value' from watching some of them. Who knows what the future may hold? You may wish then that you'd kept them.