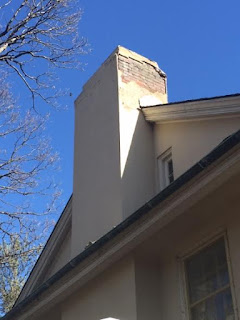 The trees swayed, the windows rattled. I thought for sure we'd at least lose a storm window. Even though we tightened them all down before Winter, it has happened before.

Still, while Friday can be date night around here, we stayed in. I was in bed by 22:30, if that tells you what an exciting life we lead.

710 remained downstairs to read, or finish watching some show. My memory is fuzzy. And by "fuzzy" it means, I probably wasn't in tune to what he was doing.

What I didn't expect was the crashing that would occur in the dark of night.

710 calls up from downstairs, "I think we might have just lost the chimney!!!".

Mind you, the chimney feeds our non-working fireplace in the bedroom. In theory, I would have known had it been that drastic, but I was a little worried and out of sorts and wasn't thinking logically or clearly.

The sounds emanated from a side of the house I didn't think a chimney would fall. Ok, save for the Fall of the House of Usher, I didn't really consider a chimney falling in the first place.  (oh - and if you have a time machine - you should really see David Soul in the horrible TV version of that story!) Then again, I never really paid attention to the layout of our roof either.

I was worried whatever was falling would have gone through the sunroom roof and smash the animals. Honestly, that was my biggest fear. My second biggest was - "what is this gonna cost us?".

As I lay there - since sleep was now beyond me - I just went over in my head (again), how much I would love to flee this house and find something smaller, and maybe more city oriented. But then there is Petey and I don't think condo or high rise apartment living is his style.

Sure, 710 went out, but now it was pushing 23:00 and pitch black out. He could see nothing. But he saw no full sized chimney sitting anywhere, so that was a big plus.

What you see in the title image is what happened: stucco (cement?) falling from the actual chimney. But it fell 15-18 feel to the top of the sunroom, which is directly outside the master bedroom windows. But what you also can see is the sloped roof, so part of it fell, hit there and then slid down and off the house - hence all the other noises. 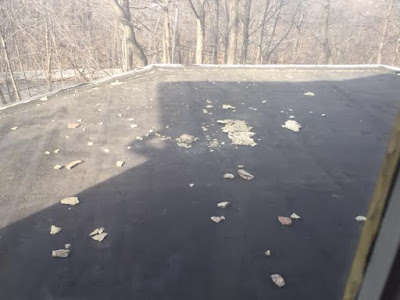 This doesn't seem like a lot of damage, but not everything fell here - some of it is in the front yard - and it did shatter into little pieces upon impact no matter where it landed, though to be honest, I don't know how big the pieces were when they dislodged.

While no one has come out to inspect it yet, a masonry guy ventured to guess the chimney itself is fine, but we'll need to restucco. Still, it seems pricey.

I haven't bothered to contact insurance yet. They'll just love us after that basement flood we had eight months ago.

Song by: Shawn Colvin
Posted by Blobby at 12:01 AM

stucco decays after a time; we had our chimney top and flue cover replaced 2-3 years ago. cost around 2K for us. our house is 75 years old now.

Homeownership.
It's always something.

Yeah, back in the day we bought the big two story home. We were young and liked big things. If I had to do it over again a smaller single story would be the choice. But we ain't a movin so here we stay. In four years it will turn 100.

One time the breeze from a window we forgot was left partially opened caused a canvas to blow off the hallway wall in the middle of the night. The sound was startling and we had no idea what had caused the noise until I turned on the light and saw the canvas/painting on the floor. Rehanging was free, unlike your situation.