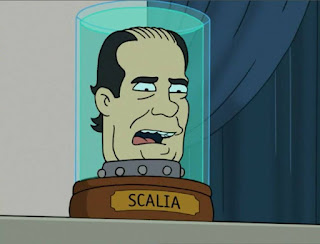 We interrupt our regularly scheduled blog post to bring you what is bound to be the best news of 2016.......assuming we get confirmation that Madonna won't put out a new record this calendar year.

Yes, I had another post slated for today - but you know this couldn't wait - Antonin Scalia is D.E.A.D.

It's possibly the best Valentine's Day present - EVER!

I know in a civil society, one shouldn't wish another person ill, let alone dead, but in this case I couldn't be more ecstatic. It reminded me of where I was when Jerry Falwell kicked the bucket and went to h.e. double hockey sticks (Farragut North - 19th St NW in DC, thank you!).

Now I'll remember where I was when I heard about Scalia - and it is SO appropriate. ..and it's totally TMI.

I was dropping some heat at the Blood Bath & Beyond shitter.

While there, I check my phone to see that my friend George had texted me the good news. Had I been constipated, that would have loosened me right up.

In the car afterwards, we tried listening to NPR to get the news, but were subjected to Garrison Keillor instead - who unfortunately is still very much alive, and a Scalia death not important enough to break into Prairie Home Combustion.

Naturally, spawn of Satan, Mitch McConnell, has publicly stated that he wants Congress to hold-up any Obama nomination for a year, so the next president can select. I'm not sure he's going to be any happier with a Clinton nominee - cuz I can't believe it will be a Cruz or Trump nominee.

I actually had to axe 710 to stop reading opposition statements (McConnell, Ben Carson, etc) to me, as it was just fucking depressing......and too much of a possibility.

I don't get to too many cemeteries, but if Tony gets buried at Arlington, next time I'm in DC, I'll be happy to piss dance on his grave. And I'll even fucking video it.

The subsequent arrest and fine will be totally worth it.

So to summarise, are we to conclude that you didn't like him then? :-)

the rethuglicans will try every fucking trick in the book to delay installing a new SCOTUS member. as for the dead person, thank the FSM he's no longer breathing my air!

Would dancing down Pennsylvania Avenue singing "ding dong the witch is dead" be considered rude?

Since Hillary has said that appointing Obama to SCOTUS might be a good idea, I would be vastly amused if the Repugnicans stop all of Obama's candidates only to find themselves saddled with Justice Obama when the dust settles.

The maturity of pre pubescent children comes to mind. We aren't even yet near the election.

And, if the GOP wants to hold up Obama's nominee--whomever that is--then I think it would be high-larious when Hillary or Bernie win and they nominate Obama.

GOP heads will explode, implode, vanish from the face of the earth.
LOVE>IT.

I admit when I heard the news my first emotion was thank goodness that son-of-a-bitch was gone.
Not nice I know but there it is.

Thank goodness at least this blog says what it thinks and lets the chips fall wherever. It's nauseating to hear network TV and PBS miraculously transform this impediment to justice into some kind of benign grandfatherly type of judge.