By nature, I am a worrier.

You might never know it to look at me - or even if you know me - but I am. It might be internal, and it might eat away at me or keep me up at night, but I worry.

Of course, being a Saturday, this is about Petey. With him, I always worry.

You've heard my things about his pneumonia, his scarred lung, his probable compromised immune system, and his on-set deafness. The poor boy jumps when I turn on a light because he doesn't know I'm behind him.

But for all his old-age issues, one things he's never had trouble with is his being able to hold "it". The man can go 24+ hours if he doesn't want to go outside due to cold or rain. Nary an accident.

Until two days ago. And we've had multiple. Both #1 and 2, but more the former. And it's in spans of four hour time increments.

He's finally over the last bout of pneumonia and now this........whatever this is.

Maybe it's just a bladder infection or a urine infection. Maybe it's worse. Or maybe it's really nothing.

I'll give him this, he has a ton of energy these last few days.

It just has me torn up while I'm at work not knowing how he's doing. I could care less about the floor or the carpet - those can be cleaned or redone. I feel bad for him! Mind you - he's a dog with no guilt, so he might not feel bad about doing it in the house, but I think on some level he does.

But for me, I worry that it's truly the beginning of the end. Again, maybe I worry for nothing, but when you're approaching 14, one just has to wonder. 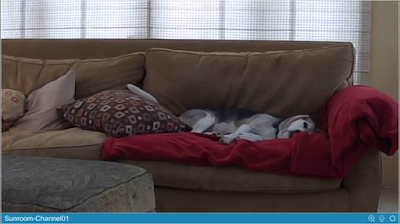 An image from the Petey-Cam - whilst I was at work. 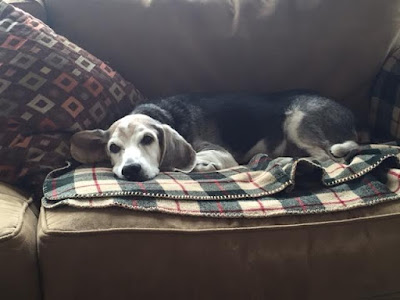 At the end of his pneumonia recovery. He's still handsome. 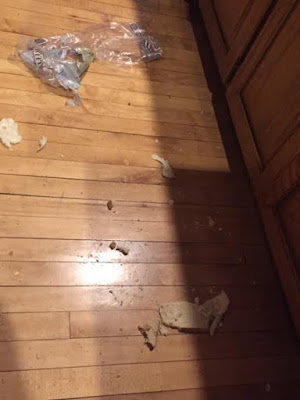 Tuesday. After the dog-walker, but before I got home. He at an entire loaf of bread (minus the heel). I'm hoping this is why his system is so far off.  I know, it's wishful thinking. 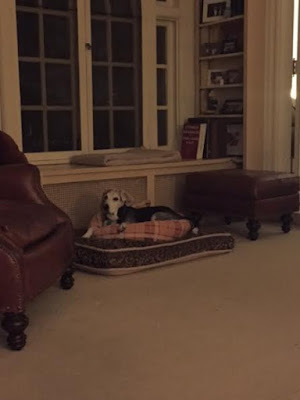 A rare sight: Petey in his bed.  He's almost never in there anymore, now that he has the sofa. 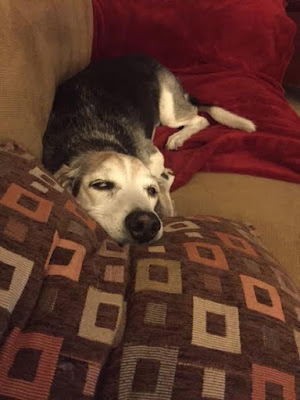 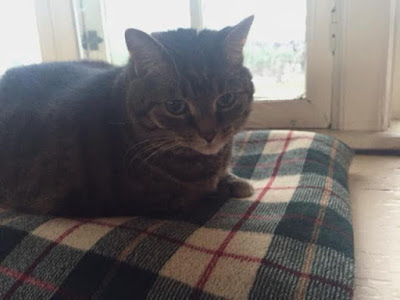 And one of the Queen.

So, depending on how he does, we have a tentative vet appointment for Mr. Pete this morning.  I'll give an update once we have it.......if we have it.

and (of course) all hail the queen!

All of us with pets know how it is to carry around that weight of worry inside. Seeing Petey in his current state is heart-rending. Can only hope that he rises over it and is soon back to his usual comfortable self.

What you feel is so natural for us parents of fuzzy ones. Do try to stay out of the what ifs and enjoy the right nows.

I believe he does feel guilty for his accidents even though he cannot help himself.
And I, too, am a worrier, especially with a pet not feeling so well.
Good thoughts for Petey and a chin scratch for Miss Sophie.

reading this, i get a bit misty- our own Hudson is 12 this summer and every time I think of the inevitable, i well up. He's in great health so I know I'm being silly but still, he's our baby. I know your anxiety. best wishes.

I'll be interested to hear the upshot of your appointment with Petey's vet. A couple of diseases that increase the pee factor come to mind: diabetes and Cushing's disease. Both are treatable. And Cushing's, in particular, could account for the increasing frequency of his bouts with pneumonia, as it increases susceptibility to infections.

Its also possible that some of his meds have affected his ability to hold "it". Fortunately you are patient and understanding.

Our beagle Jordan (may she rest in peace) one time snatched a full bag of hamburger buns off the kitchen table and ate the entire batch. We simply found the plastic bag on the floor with a slit down the middle, presumably from her nail.

think Raybeard said it best; it is a sorrow like no other watching or beloved pets decline and pass away.