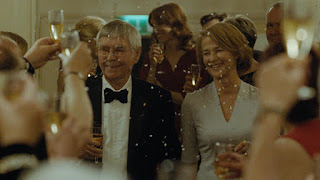 Six movies in six weeks.  This is insane.

With all are adult movies - ummm...I mean, mature-themed movies - as of late, for the last few months, almost each and every time we have been, we have seen a preview for 45 Years.

45 Years looked "serious" and it was. The preview showed quiet conflict, and there was, but from said preview you (or: I) only thought I knew what it was.

The movie took forever to come to town. Je was afraid I wouldn't see it before I needed to make my selections for the 5th Annual Academy Award Guessing Game®, as Charlotte Rampling is up for best actress.

The set-up, if you will, is the approaching 45th anniversary of Geoff and Kate, and the party that surrounds it. That and an event from prior to their marriage comes to the surface to cause a wrinkle or three in their relationship.

I assumed, from the preview, that the wrinkle would be a child given up for adoption. It is not.

The news of the finding of his ex-girlfriend's body from a mounting climbing accident 50 years prior, seemingly obsesses Geoff. I say seemingly, as the more you watch, it is Kate who is equally, if not more so, obsessed. The ensuing fissure of their relationship is a metaphor for the one that Geoff's ex fell through five decades prior.

Rampling was great!  (she is also great in the London Spy show I mentioned in the last movie review.) While she is not in exactly every shot (though close), she is in every single scene. Her face says and conveys more than any dialogue she is given. It's quite an art, actually. This is her movie.

Andrew Haigh (who produced all of, and directed some of, Looking) did a nice job. I liked his use of colour and scenery. I like how he used the mundane things of everyday household fixtures to convey stability when it might not actually exist at all.

I dare say the real story of 45 Years probably begins at the end of the film.....but you'll have to see it yourself to decide.

Crikey, Blobby. You've seen almost as many films this year so far as I have! I'd better up my game before you overtake me.

So pleased you were as impressed with this one as I was. (My number two film of last year - after 'Ex Machina' - but their relative placings are so close as to have little meaningful significance). I don't think Rampling and Courtnay have ever been better, but it's she who steals the film, helped by her having the more subtle and 'under-the-skin' role, a part which really effected me deeply, and still haunts me some months after seeing it. An extraordinarily fine film.