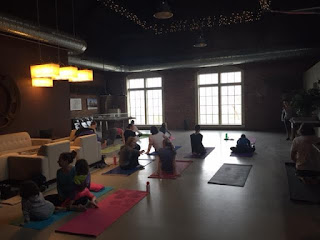 It's been a while since there's been a yoga post.

A. None of you really care about my yoga practice.

B. There are only so many times you can discuss going to a studio and doing your poses.

Normally, I try to limit these to the different times - like at the Rock Hall, or Museum of Art or the Gay Games.

At least those are somewhat different.

Last Sunday, David and I trekked to the west side of Cleveland - I know, right? - to practice in a loft space. 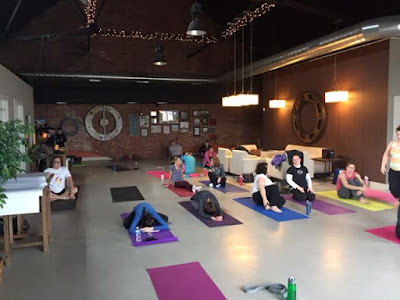 It would have made a good one bedroom apartment.

The instructor isn't bad - she's the one who did our yoga on the beach this last summer.

It was nice to go outside of the gym or the normal studio. It was more fun to have hang-time with David, who came over to see the recovering Petey. As I suspected, Petey roused from him convalescence to pay attention to his favourite human - - which it turns out, is not me.

Actually, that's ok. I love watching Petey and David together. He is the dog whisperer.

So for the next few weeks, there is yoga at this place. Donation-based. And then it's tea-time.

Personally I'd never tire of seeing you in the lotus position.
JP