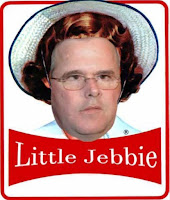 GOP flies, that is.

I suppose they land and feast on elephant feces until their invitation has been worn out - which for most of them is always after New Hampshire.

Gone are Fiorina and Christie. Of course, Santorum, Huckabee, Pataki, Graham, Jindal and Paul couldn't even get to the border of the Granite State before throwing in the towel.

Oddly (or maybe not), Ben Carson polled lower than Fiorina or Christie, but he's still in the race. Stupid Affirmative Action. And once again, Jim Gilmore got 0.0% of the vote.....so at least he's consistent.

And how is it that Shurb III got 11% of the vote and a 4th place finish?

I mean - he's only putting off the inevitable. Tick tick tick. And he's made no friends, so he shant be getting a VP nod or cabinet post.

I spit cawfee at the image on my screen.

WHO is going to muzzle the rump?

I was just saying to Carlos that it was just about a year ago that the speculation was that Bush would run and, naturally, he'd be the front-runner, win all the races and get the nod.
Things change.
Poor Little Jebbie should'a listened to his Mama.