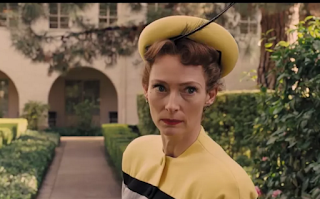 Saturday, we went to go see Hail, Caesar!.  The cast seemed ok. The filmmakers, Joel & Ethan Coen are usually better than 'ok'. But this time it was a big 'meh'.

The visuals were great. The costumes and styling were perfect. The acting - what there was of it (more on that in a minute) was solid. The casting - for the most part - was partly spot-on / partly why bother.

I mean, what fucking perfection having Tilda Swinton in dual roles. Josh Brolin might never have been better - he does a great job. Ralph Fiennes is just terrific. George Clooney, ok - and he has way nicer inner thighs than I'd ever have imagined.  .....and then the rest.

Brolin's secretary had 20 times more lines than Jonah Hill's three (3!) lines, yet he gets 5th billing. Scarlett Johanason didn't have much more to do. Coen wife, Frances McDormand - well, could have (and should have) been anyone...considering it was 15 seconds of screen time. Tatum Channing doesn't act - he sings and dances fairly well (and looks pretty),  but let's face it, he has three lines as well. Even fucking Fischer Stevens has more to do......and you haven't seen him since, what, Short Circuit 2? And poor Allison Pill has had better runs other than the 1950's housewife pretty much asking what the man of the house thinks...as she should....because you know, she's a girl.

There are some good scenes, for sure - my favourite being a discussion between four religious leaders on the potential depiction of Jebus in a movie.

Hail, Caesar! is more Barton Fink or Hudsucker Proxy than Blood Simple (still their best movie, IMHO). And thank g-d, it's nothing like Intolerable Cruelty (which was so aptly named).

The problem really lies with the story. Stories. Plural.

They are half-baked or at least not fully formed. A ransom plot where ransom money isn't the object and the hostage could easily just walk away if he wanted? A cowboy hero attempting something he's not - and when he has the chance to be that hero in real life, it amounts to almost nothing?  Or worse, that someone can be brainwashed into Communism in less than a day, and then literally have it slapped out of him in 10 seconds?

You think the storylines would and should somehow tie together - and they try, but ultimately fail. They are a hodge-podge of snippets that ultimately add up to very little. You can call it a 'send up" or a "spoof" if you want (and almost every review does), but Communism and religion in Hollywood have been done better than this and even off-shore enemies were better done is Spielberg's horrible 1941.

However, though I'm far far far too young for the movies (within this movie) to the genres that they reference that are in production at Brolin's studio, I completely grew-up with them, as they are the types of things my parents would watch and to which I was subjected time and time again.

The reviews (which as always, I read after the fact), and reviewers, for Hail, Caesar! are tripping over themselves to praise this film and I'm not sure why - other than Hollywood loves to love itself. The film is certainly not bad, but isn't stellar either (except for Swinton and Brolin). If a studio or filmmakers actually thought it was stellar it would have been released in time for Oscar contention.

I would have said - "Oh dear! And the trailer looked so promising!" - but then I see you deem it as being close to 'Hudsucker Proxy', my second favourite film of all of theirs (after 'Fargo') - and as for being better than 'Intolerable Cruelty', well that is also high recommendation as I liked that too though, of course, not quite as much as H.P.
With your essentially negative review (not without some positives thrown in), added to Fearsome B's own verdict of one thumb up, maybe there's hope yet for when it opens here. Still looking forward to it.

All I read is how bad, or, well, not good, it is, but man oh man the trailers make it seem like a ball!

While I shared that I do not think it is their best film, I believe it to be very much one of their films. Am I making sense? I actually loved the film even though it may not, at first viewing, appear to meet the hype. I will see it again. I think your review points to exactly what they convey about Hollywood of the era, and most possibly today as well, what you see isn't real.