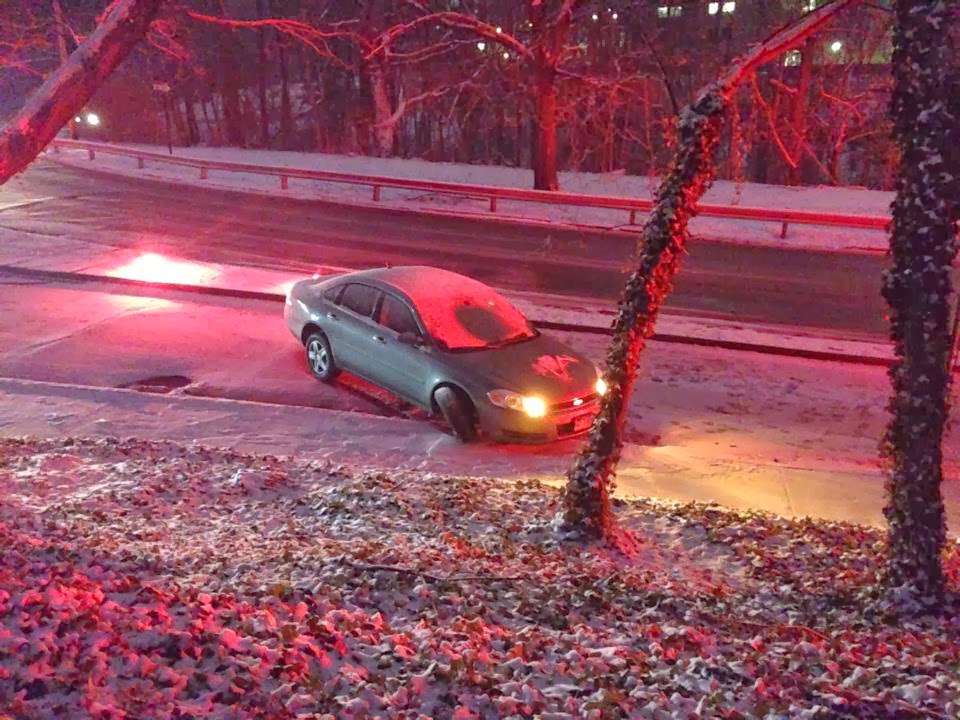 ...and here it is, Saturday evening and I thought I'd have nothing to blog about.

The plan (isn't there always a plan?) was go to the movies, but after a yoga class that turned out to be a crappy barre one, a questionable lunch and snow and freezing rain, we opted to call it a day and go home and snuggle with the animules.

I was thinking that a Shopping with Blobby segment was coming your way today. But the blogging powers-that-be had other plans.

We are about 18 days short of a year since the last (known) car came into our yard.

I say "known" because it's impossible to monitor this 24/7.

Last week, I know there was an accident a few hundred feet further down from the usual crash site(s), but that car hit the cement (say like Granny on the Beverly Hillbillies) wall and broke through the new fence the city had just put up. But they weren't really in danger of coming into the yard.

I didn't even bother to walk down to check on them. The ambulance was pulling up at the same time, so I figured they had it covered.  Even worse - I didn't bother to take a picture. What's become of me???

But like most accidents here, it isn't what you hear, but what you don't. The change of noise in the traffic pattern is what signals that something is wrong. I never even heard the ambulance or fire engines this time. Or saw the lights.

We did walk out this time, but not even to the street level. We stood above in our snow-covered ground cover, looking down upon the two cars.

The one you see in the picture - well I don't know about that whole thing.  It is unclear (ha!)  if the small circle on the windshield was the amount of visibility they had (you'll have to click to enlarge) or if it just iced over after the driver got hauled away (by cop or ambulance).

The other car, not seen in the photo, looked fine from our angle, but we're guessing it was t-boned....the driver was still inside that car....texting.

And while I mentioned the snow and freezing rain and the title of this implies there was slipping and / or sliding, I don't know there was any of that going on. The tracks look dead-on of someone not even attempting to make a turn, and coming over one cement island that had a 5" curb, then across another lane of traffic.

Oddly, the t-bone thing doesn't surprise me at all. I've been waiting for it to happen for years, though I hoped thought there'd be a lot more trauma and wreckage.

Funnily, the biggest concern came from an elderly neighbor who called, a little bent out of shape that all the traffic was being diverted down our street (as they could no longer go down the hill) - even though he was just sitting in his living room watching the cars drive past.

Like I've said previously, I expect nothing to be done about this curve until someone loses their life.  ...and maybe not even then.

I did say "seee-MENT" just like granny! ugh, more snow and ice for you; ain't winter through YET?

Well, at least they won't end up in your house.

You should put up a camera and record. The road, that is.