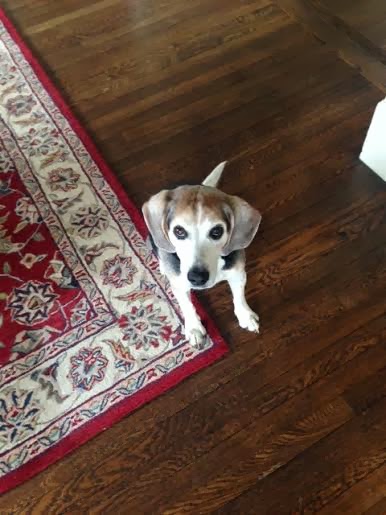 Petey had a big day out - unfortunately.

While I was at yoga, 710 let him out to do #1 and / or #2, which he did. Then in a two minute time frame of not being supervised, broke through the Invisible Fence and disappeared.

710 realized early on that Mr. Pete had make a prison break.

Still, 50 ft to the right of us is a major road and past that a ravine - 75 feet straight down in some places.

Poor 710 was calling me, but I didn't have my phone handy, as I was in class. He left me a text too, so as soon as class ended and I saw it, I beat it out of there - not even putting on my sweat shirt, pants or coat.

710 enlisted a few neighbors in the search. When I got home, after quickly putting on clothes, I sent an email to the entire 'hood asking for assistance. A few really sprang into action - which was nice.

While 710 was still in the ravine, I went walking through the 'hood and actually out of it, into another very busy intersection.

I was three streets over when 710 called to say Petey had been found. A neighbor had read my email and his sons, ages 3 and 6, said "we have to go look for Petey!"

That trio came across a jogger who found Petey in the ravine, seemingly coming back home.

We say 'seemingly' because there is no way of knowing. Petey is smart and knows where we live - kind of - but he's a hound and he travels by his nose, which is why he went through the fence in the first place. And his nose is bigger and stronger than his brain.

Truth be told, it's 12 hours later almost and I'm still a wreck.

Petey was home for about 15-20 minutes before I made my way back. He came trotting over to see me, fairly excited...which is when I took that picture.  No shame. No guilt.  No sorrow.  ...at least I don't think.

Since he got home, he hasn't left either 710's or my side. And he's just exhausted.

He might have had a big adventure, but I think maybe he may have been a little scared to be on his own like that. I know I was scared for him.

So now we have a keen eye on him anytime he has to go out, though right now, we actually have to wake him up to even think about going outside.

Song by: Suzanne Vega
Posted by Blobby at 12:01 AM

that IS scary to think he went past the invisible fence.

the cute part - the young boys wanting to help!

don't let the clever boy out unsupervised again. I KNOW your heart stopped while he was lost.

OMG - what a living nightmare! What a relief it ended the way it did. And the memory of it will hang around forever - for everyone except him.

I think all of us who love our dogs as deeply as you ad 710 do have been through this. It's the worst feeling in the world. I'm sure the whole family is feeling some PTSD today. Much love to all 4 of you.

OMG, cutest dog ever. With a look like that no treats for at least 15 minutes if you can hold out. You could always make him watch Roots and tell him you will go all Laver Burton on him if he tries to escape again.

Having a beagle and an invisible fence is your first problem.

That is the second worst feeling. I'm so glad it turned out fine.

Tramp is forever running to things - not running away. I have a fenced yard but he is great at getting out the door or making a break for it - I can see it in his eyes when he's about to do it. On a few occasions, he decided not to respond to my calls in the house and I didn't see him and thought he had gotten out - that's really fun!

He's a bit slower now but I did get him a GPS collar that sends alerts to my computer and cell whenever he leaves the zone. Of course I've only needed it once since I got it but it but it has been worth it. It was $90 for the tag and just $8 a month for the service. My brother-in-law bought the system to use on his father.

I'm glad everything turned out good. Petey looks so sweet in your picture, how could you not forgive that sweet little fellow

This reminds me of the time (about 10 years ago) when I got a call from a neighbor telling me my dog was in his house. Our beagle Jordan had gone on an unsupervised field trip (escaped from our fenced yard) and ended up going inside a neighbor's house. She got out again the next day, until we discovered her Hogan's Heroes-like escape hatch.

I'm glad he's safe. Our late dog Grizz had a bad habit of running through the invisible fence. We had it set to max, yet he would still barrel through it on occasion. Then he wouldn't come back in for the same reason he wasn't supposed to go out.

And I think I need to get one of those Tagg Pet Trackers for the Husbear when we travel. That would make life so much easier. ;-)