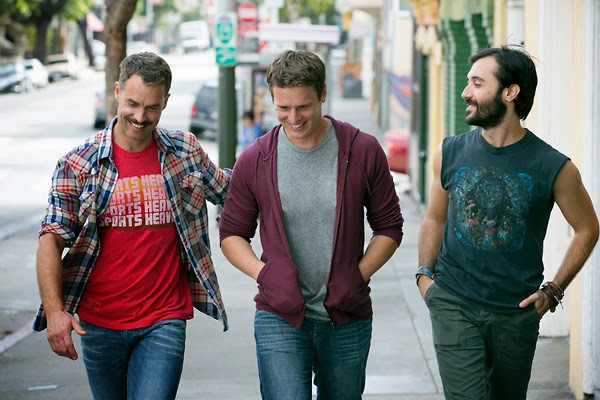 A month or so ago, I might have easily marginalized HBO's Looking, by calling it the "gay Girls".

That was kind of short-sighted of me, though one can easily make some comparisons to both shows. But only kind of.

While there are a lot of similarities, I may have sold Looking short.

Girls certainly has its place and time, but their episodes (while having many more of them) are a little uneven to me.  When they're good they can be great, but when they're not....well....ehhhhhh.

Maybe I don't relate as much to Girls, as I am not one. Or a 20-something one, at that.

Lena Dunham might be ok with her body, but I don't want to see it all the time - and I'm not talking about her dirty pillows or Sarlacc pit either. It's those badly drawn tattoos that look like they're just done with a medium tip Bic pen that seemingly make me uncomfortable. In my mind, I'm moving ahead 10 years and regretting her ink for her.

Looking, for me, is at least more relatable. They are gay men in their late 20s and now for some of the main characters, into their 40s.  If you throw Scott Bakula's character in there, now you have one in his 60s. It's a tad more diverse that way.

Like the four women on Girls, the three main guys in Looking are floundering - either professionally, personally, romantically or all of the above. And if you left it there, yes, the two shows are similar. I made my comparative statement after the second episode of Looking, so I had little to go on.

Looking does a better job of capturing the dynamics of friendships and / or relationship that can be difficult or new. They actually take time to process the whys, whens and whats. Girls can just gloss over those and never revisit. The girls never seem to learn much from their experiences.

Nor do the girls on Girls really seem to like each other, which I always saw as a huge flaw. Honestly, I have no idea why they're friends at all. They are much more self-absorbed than gay men - and that's saying something.

My favourite Girls episode of this season was a beach house weekend where they all just kind of lashed into each other. Things you wished they said year one. But how you come back from that scathingly honest discussion, or ever talk to one another after that, is beyond me.

It can be argued that Patrick (Jonathan Groff) is the Hanna(h) (Dunham) of Looking. His naïveté for being a 29 year old in the big city with big career is a little hard to fathom. I wasn't that young ten years prior. But he has better coping mechanisms than a Hanna(h). Not great, but better. Neither one knows exactly what they want.

It can be argued that each series has a character hitting rock bottom (Augustine / Jessa) and a pair that are starting to realize their professional and personal potential  (Dom / Marnie). But again, there is a level in the males that would negate that myth that women mature faster than boys.

And yes, Girls has their resident 'best gay' and Looking has their fag hag, so in that regards, they both have that covered.

Both Patrick and Hanna(h) deal with their parents and both with some animosity about each other's perceptions of their life choices.

It was great to see Patrick almost come to the realization (even though it was spelled out for him) that if he has dating issues because of what he perceives to be his mother's approval, that those rest solely on him.   ....and Julia Duffy, as Patrick's mother, was great casting. I almost didn't recognize her, but she did a great job.

Girls may have the advantage in acting. You feel that a lot of the time they're so annoying that it's not an act, so if they are applying their craft, it's working.  With Looking, they're all fine actors, though the strongest one might be Ritchie, Patrick's would-be boyfriend - he conveys a certain depth the other men don't seem to posses.

Still, I think HBO sold Looking short with only eight episodes. It is slower moving than Girls, so just as you started to get a little invested (especially with episodes 5 and 7 especially), it's over for another year (?).    (for the record, I really liked two of Girls episodes  - 7 and 9.)

On the other hand, Girls has had some horrendously bad shows, while at its worst, Looking's were still decent.

Overall, I enjoy Looking much more, as I think it has better growth potential. I slightly care more about their characters than their female counterparts. I am looking forward to their second season, which HBO just picked up.

On a not completely unrelated note:  I'm thinking Disney must be shitting bricks that their newest animated prince is on HBO taking it up the butt.

Sometimes I wish I had HBO....

Good post. I blogged about Looking after seeing the first episode. I was less than impressed. It isn't that I didn't enjoy it - just that it had been done so many times before. I also acknowledged that it is hard to get through the required exposition in a 30 min format.

I still can't say I am impressed but I admit it has gotten more interesting with the addition of more characters and more backstory.